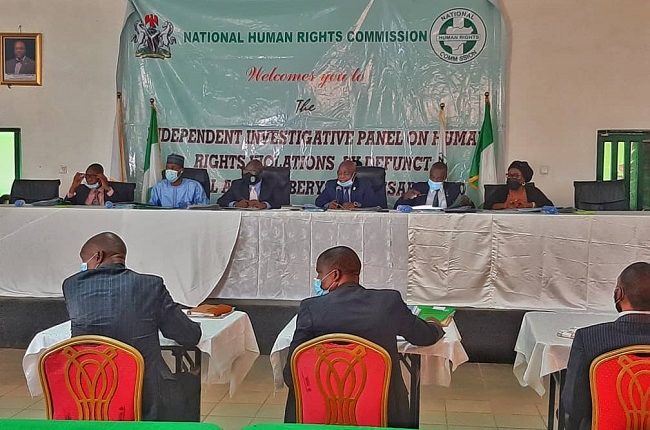 The independent investigative panel on violation of rights by the defunct SARS and other police units on Monday ordered the Inspector-General of Police (IGP) to arrest four police officers allegedly involved in the extrajudicial killing of one Ovoke Onomrerhino, who was alleged to be an armed robber on June 29, 2019, in Ethiope East Local Government Area of Delta State.

The father of the deceased, Mr Godwin Onomrerhino, had petitioned the panel on behalf of his son, alleging that the deceased was extra-judicially killed by a former Divisional Police Officer (DPO) of Abraka Police Division, Delta State, CSP Hassah Isah and others.

Apart from Isah, the petitioner also joined the investigating police officer (IPO), Inspector Kambari Tambari; the chairman of Igun Vigilante in Ethiope East, Mr Odiri Emeni; Delta State Commissioner of Police and the Inspector-General of Police as respondents in the petition.

The order was given by a member of the panel, Garba Tetengi (SAN), who stood in for the chairman of the 11-member panel set up by the National Human Rights Commission (NHRC), Justice Suleiman Galadima (rtd), following the failure of the policemen to appear before the panel and also tender some documents.

The policemen ordered to be arrested are Sergeant Sunday, Lucky Kehinde, Lucky Okuku and Sunday Musa.

According to Tetengi, “This order is directed to the fifth respondent, the Inspector-General of Police, to ensure compliance.”

The panel thereafter adjourned further hearing of the petition till April, 15.

According to the chairman, “The order of December 3, 2020, still stands. In addition, Inspector Kambari Tambari should produce before the panel the documents on the movement of the deceased corpse.”

When the petition was first heard on December 3, 2020, the petitioner narrated how his son was allegedly killed by the police, adding that he later wrote a petition to NPF Zone 5 for investigation.

CSP Isah and Inspector Tambari while testifying before the panel the same day, gave contradictory accounts of the death of Ovoke, who they alleged was an armed robber.

Isah said the deceased was arrested on June 29, 2019, by the Igun Vigilante for an armed robbery incident on the Eku-Igun highway in Delta State on June 28, 2019.

The former Abraka DPO said the victim took policemen to where his gang kept their operational weapons they used in the robbery operation, adding that, as they were returning to the station, the deceased jumped from the police vehicle while in motion and got injured.

He added that he went to inspect him and gave his men N5,000 to take the victim to the Abraka General Hospital for treatment.

“I was told Ovoke confessed and wanted to take the police to where their operational weapons used for the robbery on Igun road. When they came back, they told me that they recovered two guns and some cartridges.

“As they were driving into the station, Ovoke jumped down from the vehicle while it was moving and got himself injured. He was rearrested and brought to the station. I ordered that he be taken to Abraka General Hospital.

“I ordered ASP Alex to follow them. I gave them about N5,000 to commence treatment. It was Alex that informed me that while he (Ovoke) was receiving treatment he died,” CSP Isah told the panel.

While informed that the remains of the deceased were still lying at a private mortuary at Obiaruku, Delta State, Isah denied having a hand in the Ovoke’s death.

On his part, Tambari stated that the late Ovoke attempted to escape and jumped out of the police vehicle after they recovered the armed robbers’ operational weapons where they kept it and hit the road.

“As we were going back to Abraka around 1:30am, he jumped out of the vehicle and hit himself on the road. He was unconscious and we rushed him to the hospital.

“He was confirmed dead at the hospital, Abraka General Hospital. Based on the incident we contacted our DPO who advised that we should take him to the mortuary, Medicare Hospital at Obiakuru,” the Tambari, who was the IPO in the case, told the panel.

In spite of the huge investment in the water sector by the government and international organisations, water scarcity has grown to become a perennial nightmare for residents of Abeokuta, the Ogun State capital. This report x-rays the lives and experiences of residents in getting clean, potable and affordable water amidst the surge of COVID-19 cases in the state. | panel orders IGP to arrest | panel orders IGP to arrest