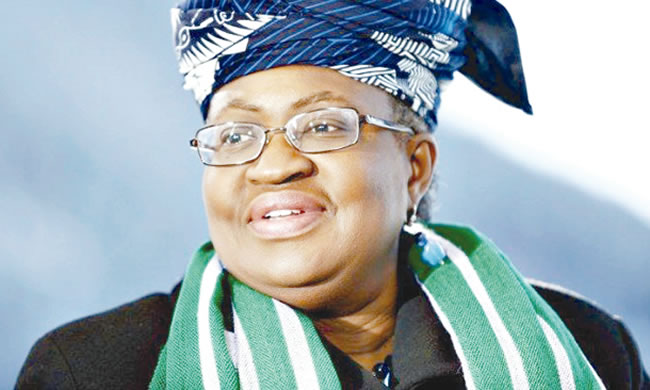 Ngozi Okonjo-Iweala has become the first woman and first African to head the World Trade Organisation (WTO). ENIOLA OYEMOLADE in this piece discusses how she became the head of the Switzerland-based institution, her plans, among others.

Ngozi Okonjo-Iweala has been appointed the new chief of the World Trade Organisation (WTO) becoming the first woman to ever lead the Switzerland-based institution and the first African citizen to take on the role.

This is not the first time Okonjo-Iweala will be making history.

She was the first woman to take on the Nigerian finance ministry and the foreign ministry after she graduated from Harvard University in 1976 and then earned a PhD from MIT. Okonjo-Iweala was also the first female to run for the World Bank presidency where she spent 25 years.

Her WTO appointment follows months of uncertainty which arose when the United States initially refused to join the consensus around Dr Okonjo-Iweala and threw its support behind Trade Minister Yoo Myung-hee of the Republic of Korea.

However, following Ms Yoo’s decision on February 5 to withdraw her candidacy, the administration of newly elected United States President Joe Biden dropped the US objection and announced instead that Washington extends its “strong support” to the candidacy of Dr Okonjo-Iweala.

“My vision is also of a rejuvenated and strengthened WTO that will be confident to tackle effectively ongoing issues,” Okonjo-Iweala told WTO members during a hearing in July.

“It is clear that a rules-based system without a forum in which a breach of the rules can be effectively arbitrated loses credibility over time,” she said at the same hearing.

Officials in the European Union and the United States have previously said the WTO needs to be reformed and its rules updated, but there is no consensus on how to do it.

“The WTO appears paralyzed at a time when its rule book would greatly benefit from an update to 21st century issues such as ecommerce and the digital economy, the green and circular economies,” Okonjo-Iweala said.

While declaring her support for the women folk as regards global trade, she said: “greater efforts should be made to include women-owned enterprises in the formal sector.”

Okonjo-Iweala has said she can take hardship, having experienced Nigeria’s brutal civil war during her teenage years, during which her family reportedly lost all their savings.

“I can take hardship. I can sleep on the cold floor anytime,” she told the BBC in an interview in 2012.

When serving as Nigeria’s finance minister, kidnappers demanded Okonjo-Iweala resign after taking her mother hostage. She refused to comply and they ended up releasing her mother a few days later, the BBC reported.

She has also been involved in the fight against COVID-19, being the African Union’s special envoy on the matter. Okonjo-Iweala has been a board member of Gavi, the Vaccine Alliance — a public-private health partnership immunising people in poorer countries.

Dr Okonjo-Iweala said a key priority for her would be to work with members to quickly address the economic and health consequences brought about by COVID-19.

“Today, WTO Members are making history. For the first time in the seventy-three years of GATT and WTO, you are selecting a woman and an African as Director-General. This is groundbreaking and positive. I am grateful for the trust you have in me, not just as a woman and an African, but also in my knowledge, experience, and, as some of you have said, possessing the courage and passion to work with you to undertake the wide ranging reforms the WTO needs to reposition itself for the future,” her statement read.

“A strong WTO is vital if we are to recover fully and rapidly from the devastation wrought by the COVID-19 pandemic. I look forward to working with members to shape and implement the policy responses we need to get the global economy going again. Our organization faces a great many challenges but working together we can collectively make the WTO stronger, more agile and better adapted to the realities of today.

“The challenges facing the WTO are numerous and tricky, but they are not insurmountable. There is hope. There is light at the end of the tunnel if we work together in a transparent manner that builds trust, builds bridges, defuses political tensions, and encourages convergence,” she said.

General Council Chair, David Walker of New Zealand, who, together with co-facilitators Ambassador Dacio Castillo (Honduras) and Ambassador Harald Aspelund (Iceland) led the nine-month director-generalselection process noted that: “This is a very significant moment for the WTO. On behalf of the General Council, I extend our warmest congratulations to Dr Ngozi Okonjo-Iweala on her appointment as the WTO’s next Director-General and formally welcome her to this General Council meeting.”

Dr Okonjo-Iweala will take office on March 1, and her term which is renewable, will expire on August 31, 2025.

Born in Ogwashi-Ukwu, Delta State, Nigeria, where her father Professor Chukwuka Okonjo was the Obi (King) from the Obahai Royal Family of Ogwashi-Ukwu, Okonjo-Iweala was educated at Queen’s School, Enugu, St. Anne’s School, Molete, Ibadan, and the International School, Ibadan.

In 1981, she earned her PhD in regional economics and development from the Massachusetts Institute of Technology with a thesis titled Credit policy, rural financial markets, and Nigeria’s agricultural development.

She received an international fellowship from the American Association of University Women (AAUW) that supported her doctoral studies.

She is married to Ikemba Iweala, a neurosurgeon from Umuahia, Abia State, Nigeria. They have four children, including author Uzodinma Iweala, whose debut novel, Beasts of No Nation published in 2005, was adapted as an award-winning film in 2015.

In 2019, Okonjo-Iweala was elected to the American Academy of Arts and Sciences. She was also conferred High National Honours from the Republic of Côte d’Ivoire and the Republic of Liberia. She is also the recipient of Nigeria’s Commander of the Federal Republic (CFR).

I’ve always been enthusiastic to be a health professional —Basirat Rufai, UI Pharmacy…