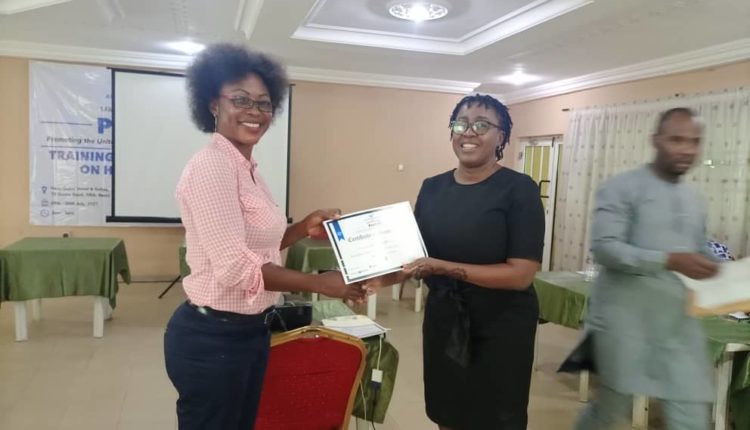 The two-day event, which drew journalists across media houses in Edo State was on “Fundamental Human Rights; Promoting Human Dignity-Salient Provisions of the United Nations Convention against Torture; Accountability of Perpetrators of Human Rights Abuses under the Anti-Torture Acts 2017” among others.

Speaking, the facilitator, Mrs. Edugie Amihere, said the training was designed for media workers, first to understand their rights, so that they could become human rights advocates, arguing that the Anti-torture Act(2017) is an important step in ensuring justice for victims of torture and curbing the practice of torture in Nigeria.

She stated that since 2009, ASF had been providing free legal services to victims of torture in Nigeria through their ProCAT project, adding that the organisation believed that producing copies of the Anti-torture Act 2017 would create awareness among security agencies and the general public In the existence of this important legislation and to encourage its implementation.

“Since,2009, ASF has been providing free legal services to victims of torture in Nigeria through the ProCAT project and, the organization believes that by producing copies of the Anti-torture Act 2017, awareness will be created amongst security agencies and the general public of the existence of this important legislation and to encourage its implementation”.

“I am, urging other states to follow the steps of Lagos State which has domesticated the Act. It is only when it has been domesticated that it can be enforced by every court in the State”, she intonned.

Also speaking, Mrs. Patricia Iyomon said Nigeria is never in want of good laws but lacked the will to Implement such good laws.

She said everybody should stand up and speak against torture and human rights violations by security agents.

According to her “human rights are those rights inherent in us as human and which cannot be taken away”, maintaining that the Nigerian constitution had guaranteed the fundamental rights of its citizens.

Also, highlighted at the training was the “United Nations Convention against Torture and Other Forms of Cruel, Inhuman, Degrading Treatment or Punishment.”(Adopted by the UN General Assembly resolution 39/46 of 10 December 1984) which states that the “recognition of the equal and inalienable rights of members of the human family is the foundation for freedom, justice, and peace in the world and that those rights derive from the inherent dignity of the human person.”

How to Read Altcoin Signals: Information Every Trader Should Know