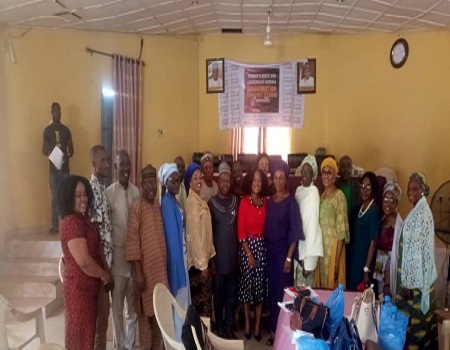 A non-governmental organisation with bias for women and children, Women’s Voice and Leadership Nigeria of Global Hope For Women and Children Foundation (Glohwoc), has inaugurated a steering committee to strengthen 240 women into owning and controlling assets in Kwara State.

Speaking during the inauguration of the committee in Ilorin on Monday, chief executive officer of Glohwoc, Mrs. Christy Abayomi Oluwole, said the group, in partnership with Action aid and Global Affair, Canada, hoped to advance women’s economic empowerment and equality in the state.

Oluwole said that the NGO would operate the project in the Ilorin South and Irepodun local government areas in the Kwara Central and Kwara South senatorial districts, respectively.

Oluwole also said that the foundation would address issue of gender based violence, adding that father violating his child is an abomination as far as the two religions are concerned.

“Through the foundation, it would be a thing of the past as we hope to push legislature to back it up in order to curtail it among people. Global Hope for Women and Children foundation is a non governmental organization which envisioned a society where women, children and other vulnerable population have the opportunity to realise their utmost potentials.

Also speaking, the state commissioner for Social Development, Mrs. Deborah Abosede Aremu, called on women in politics to put in their best in positions they hold.

The commissioner, who implored the 15-member project steering committee of the foundation to carry out their duty as expected of them, especially as regards gender based violence.

“If you look at the population now, we know that women are more than men, what we are doing now is that we are not going to concentrate on the women alone. We will carry the men along. The best thing is to carry the two gender along.

“Violation of women rights will not be tolerated any longer. women too should be able to participate in politics to have a say. They should allow the women to contribute to take part. We too have good agenda. When you say women should keep quiet, the good agenda will not be realised and when you voice out, you wil have one or two things that will help the society at large,” she said.