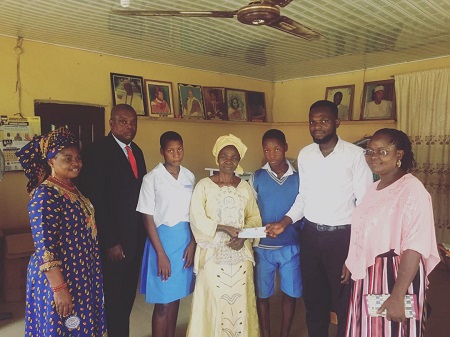 The two orphans, Alao Usman and Alao Hamdalat were selected based on academic performance and their level of needs. The siblings will not only receive support in terms of school fees but the Foundation will also empower them with vocational and life skills.

While presenting the award at the principal’s office, the founder of the NGO, Mr Sola Matthew, explained that his organisation was created for the development of children, youths and women.

When asked what inspired him to start the foundation, he said “It happened that I lost my father when I was 6 years old. After that, I had to be raised by my single mother.

“On the 10th of January, 2004, my mother died after giving birth to my stepbrother. Since then, I had to struggle by hawking on the streets of Ado-Ekiti and also did bricklaying job to make ends meet. I was helped along the way by some people but even in the university, life was not easy for me. I can say I was living below poverty and not just in poverty.

ALSO READ: #KogiDecides2019: We shall record zero votes in areas where ballot boxes were snatched ― INEC

“On the 11th of June, 2014, I believe God inspired me to start reaching out to the less privileged like me. I had no money at all but just the vision. I told some of my friends and we started an Initiative (Christian Charity Network — CCN) in school to support orphans and vulnerable children. We used to gather donations to orphanages. After my university, we registered as Christiana Titilayo Foundation, a Non-Governmental Organization (NGO) dedicated to the development of children, youths and women.”

He further explained that the plan of the NGO is to reach more target audience and by the end of 2020, the Foundation would have supported at least 1000 children to school.

“We have set up a donation page on our website (ctf.org.ng/donate) to that effect. We envision an Africa where every form of poverty is eradicated.”

Mrs Shittu, the guardian to the orphans, expressed her appreciation to the NGO, “I don’t know what to say but to appreciate the NGO and the counsellor for the recommendation. I am very grateful, she said.”