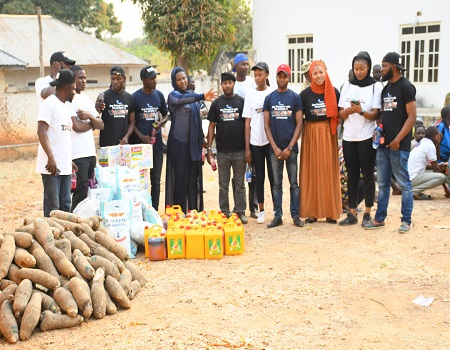 A non-governmental organisation (NGO), Mental Health and Wellness Initiative (MHWI), has donated food items and other relief materials to the victims of Tawari attack to ameliorate their suffering.

The MHWI founder, Miss Salihat Badamasuiy, who led a team to the community, said the visit was informed by the need to assess the level of psychological trauma the villagers would be going through following the senseless attack.

“We are here to spare our thought for the people of Tawari community. The ugly incident is ungodly, wicked and condemnable as it has left a permanent scar on the psyche of the residents.

“They need every moral support to heal them of the trauma and depression that this unfortunate incidence has caused them”, she said.

The traditional head of the community, the Aguma of Tawari, Alhaji Idris Yusuf, led the MHWI team through the community to assess the damage done by the attackers.

Recounting their losses, Yusuf said he escaped death by the whiskers, saying, “They burnt down my house and my car. My driver died in Abuja from the thick fumes inhaled from the inferno. I escaped by the grace of God”.

The 78-year-old Tawari chief narrated shocking revelation of the attack amidst tears and visible anger.

“I lost 25 people in one night and my driver who died in Abuja making the 26th casualty.

”The chief Imam of the community was writing his sermon for Friday prayer when they broke into his room and shot him at close range.

”Look at the village almost completely deserted. The few people left are living in fear. We are traumatised and that’s why I was excited about the news of your coming to see the carnage”, Yusuf said.

The monarch said he had been suing for peace and had repeatedly warned the youth of the community against a reprisal attack while commending Kogi State Government for the prompt response to the incident.

Yusuf, however, appealed to government at all levels, civil society organisations and resourceful individuals to come to their aid in their spirited effort towards rebuilding the community and facilitate the return of the displaced people.

He thanked the National Emergency Management Agency (NEMA) for the relief materials donated to them and promised to ensure that the items were evenly distributed to the affected people.

The organisation said that there was also a plan to sink a bore-hole and work with stakeholders to light up the community with Solar power.

Earlier, the team visited the Administrator of Kogi LGA, Barr. Musa Muhammed Tanko at the council secretariat in Koton Karfe on their mission, Badamasuiy condemned the gruesome attack, noting that the NGO was committed to addressing mental health challenges in Nigeria.

In his response, Barr. Tanko commended the organisation for the gesture and pledged his unalloyed support in any area his office would be needed to bring a smile on the faces of the people again.

“I must commend your decision to take this bold step in sparing a thought for the people of Tawari; you have taken a giant stride, working on healing the psyche of our people.

”As the chief executive of the local council, I pledge my support in whatever capacity required of me to bring a smile to the face of the sad people of Tawari community”, Tanko said.

The group also paid homage to His Royal Majesty, Alhaji Abdulrazak Gambo IsaKoto, the Ohimege Igu of KotonKarfe, who described the Tawari attack as an act of terrorism.

The monarch thanked the group for focusing on the mental well-being of the society, noting that the visit was timely and strategic.

“Tawari is not only a remote community but has a rich history. What happened there can only be likened to a terrorist attack on the defenceless people.

”Even though the trauma would take time to heal, the visit by MHWI would lift their spirit”, Ohimege said.

Some unknown gunmen had on Jan. 2 attacked Tawari community in Kogi Local Government Area, and killed 26 people, burnt down over 50 buildings, churches and the palace of the king of the community.