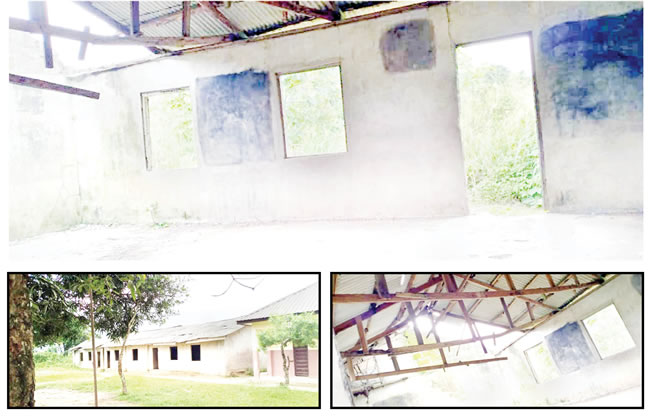 For the pupils of QIC Primary School, Ikot Obio Ndoho in Mkpat Enin Local Government Area of Akwa Ibom State, the story of hopelessness due to poor state of facilities and rot has been a constant and the recent assistance rendered by a nongovernmental organisation, Mkpat-Abasi Group, USA, in renovating and furnishing a block of classrooms for the Early Child Care (ECC1/ Crèche) class is just a little of what the school actually requires. UDEME UTIP reports that while the development is a dream come true for the crèche section, the school remains short-staffed as fewer than six teachers attend to over 200 pupils.

Many government schools face various challenges across the country and Akwa Ibom state is no exemption; Schools in many rural communities groan under the burden of poor facilities and rot coupled with the challenge of inadequate number of teachers to cater for the mental development of the pupils.

The situation of many primary schools in the rural communities with a large number of pupils is a source of worry to parents and other stakeholders. In some of the schools, fewer than six teachers cater for all the pupils; from primary one to six.

This was part of the observations of Nigerian Tribune when a nongovernmental organisation (NGO) under the aegis of Mkpat-Abasi Group, USA, intervened and donated some plastic chairs and tables to Early Child Care (ECC1/ Crèche) class of the QIC Primary School, Ikot Obio Ndoho in Mkpat Enin Local Government Area of the state, a school that serves five villages.

The gesture was in fulfillment of the promise made by the group which is made up of Ikot Abasi and Mkpat Enin Local Government indigenes in the United States of America when they pledged to support educational, medical and cultural projects in the two LGAs to make life easier for the people.

They had earlier sent members on a visit to identify schools that need intervention and QIC Primary School, Ikot Obio Ndiho was one of the schools they identified as needing immediate intervention as it has the challenge of inadequate teachers, dilapidated classroom and furniture for pupils.

The group found that the school, which has over 200 pupils from crèche to primary six, has only four teachers, including the headmistress. They also found that the wooden desks provided by government were not useful for children in the crèche

Dr. Joseph Akpanikot, the president of the NGO, while handing over some chairs and tables to the school, said researchers had emphasised the importance of early childhood education as an essential building block for a child’s future, hence the decision to take up the project.

He added that the stories that infants in the crèche fall off the heavy desks provided by the state government, made the organisation to ensure that the plastic chairs suitable for children their age, were provided for the crèche before the resumption of the new academic session.

Akpanikot, who was represented by the treasurer of the group, Mr. Steve Ikpim, noted that children of such ages deserve an enabling environment to learn for their brain to develop positively, promising that the organisation would do everything possible to ensure that the crèche section of the school is encouraged.

According to the president, “When I came home, I decided to pay a visit to know what my group abroad can contribute to make the school better and from my findings, I saw the dilapidated classroom blocks, no perimeter fence, electrical pole in the middle of the school field, and the cables almost touching the grass. The headmistress also told me, she needed desk for pupils in the crèche, that those children do fall from the desks provided.

“I took pictures and sent them to the group and all members felt sorry for those little children, and that is the reason we decided to fix their classroom and provide soft chairs and tables before their resumption date.

“I give glory to God for the enablement and I also thank the headmistress of the school, Mrs Korona Akpan and the village head Eteidung Friday Jeremiah Akpan for accepting our token of love to our community.

“Researchers have emphasised on the importance of early childhood education as an essential building block of a child’s future, so our Children at the Early Child Care class deserve an enabling environment to learn and interact with their age mates, and this will help their brain to develop positively. We will try our best to encourage those children because education is the key to success”, Akpanikot stated.

The school headmistress, Mrs Korona Akpan, who spoke with Nigerian Tribune on the school premises, stated that apart from lauding the group and the initiator of the idea for reaching out to the school; they have rescued the future of the children and generations unborn that would learn in the school and prayed that God would bless them abundantly.

She however called on the Akwa Ibom State Government to send more qualified teachers to the school as they have only three teachers to teach 250 pupils from ECC one through to primary six. She also called on the state government and relevant authorities to help remove the electrical poles and cables from the school field, complaining that pupils no longer play on the field for fear of being electrocuted.

According to her, the poles were taken out of the roadside to the middle of the field with a promise from the authorities that immediately after the dualisation process on the road, they would be taken back to the roadside. She added that “the work had since been completed but the polls are still on the school field. I have seen and received this great gift from Mkpat Abasi group, USA, to our crèche section (ECC1). Furnishing a whole classroom with plastic chairs and tables, including two teachers table and desk, sir we are grateful. Extend our thanks to your members, our children will have a story to tell their parents at home and they will no more fall from the heavy desks.

“I always feel sad seeing the children fall from those heavy desks, especially the last incident in which a child had a dislocation. That is why I told the group about it, and not up to a week, this group furnished the children’s class and it now looks like what I have been seeing on television, may God Almighty visit you all at the point of your needs.

“I want to use this medium to call on the government of Akwa Ibom State to send us teachers; the population of this school is 250 pupils as at last term, with only three teachers including myself, the headmistress. We have written times without number to the Ministry of Education, Akwa Ibom state, but up till now, there’s no response from them.

“We also call on our government, charitable organisations, lovers of education and able individuals to help us renovate the three dilapidated  classroom block because we only have four classrooms right now for ECC one to primary six, we have been managing, we are pleading, please come to our rescue,” Mrs. Akpan said.

The community leader, Eteidung, Chief Friday Jeremiah Akpan, expressed gladness at the donation by Mkpat-Abasi group, USA, calling on other well meaning indigenes of the area to emulate the kind gesture and give back to the society that produced them. He prayed to God to replenish the source of their income.

As at the time of filing in this report, all attempts to get the reaction of the state government on the situation proved abortive. Repeated calls made to the Permanent Secretary, Ministry of Education, Elder Asuquo Selong, were unanswered. He also failed to return the calls.

How NGO is empowering, build sustainable future for corps members

Inside Ekiti school where pupils, teachers run for cover whenever it rains

Blasphemy: Another death too many

Education: The high and low of quest for excellence