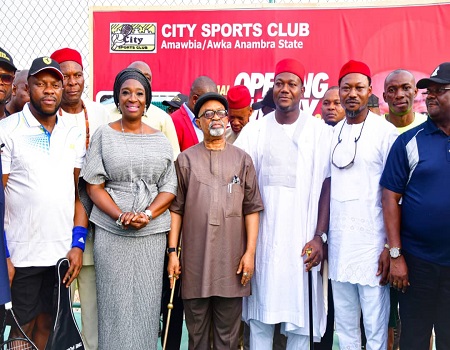 They said more involvement of Nigeria youths in sport’s activities would help to combat crimes, positively engage and expose youths to the needed experiences to develop their future talents instead of been used as political thugs.

The stakeholders made the call during the Official inauguration of Engr. Johnbosco Onunkwo Premium Lawn Tennis Court at the Awka City Sport Club Yard, in Awka, the Anambra state capital, over the weekend.

Performing the official commissioning, build by Engr. Johnbosco Onunkwo, Senator Ngige commended his effort in the development of sports in Anambra State, maintaining that the project will go a long way in reviving sports in the six geopolitical zones of the country.

Ngige said he was so impressed at seeing old men and women in 70s looking 40s, in a court single handling build by a Chieftain of the All Progressive Congress in the state.

He called on the need to sensitise more youths in the country to join the sports industry for global competition.

The state acting Chairman of APC, Chief Basil Ejidike, who also speak at the occasion, described the project as a welcome development urging well-meaning Nigerians and politicians to look beyond political affiliations in contributing to the overall development of sports for Nation’s grow.

The benefactor, Engr. Onunkwo, in his remarks, expressed thanks to God for the opportunity to be contributing to society. In his words: “The court is part of our commitment in encouraging sports development in the country. We can’t excel in sports if we don’t have to enable the environment and available facilities for such, hence why my foundation deemed it imperative to start off with the construction of the Premium Court”. He equally averred that Sports Development is at the epicentre of his cardinal areas of development as he set for the Governorship election come 2021.

He called on wealthy individuals in the state and beyond to join him and invest in sports as a way of arresting youth unemployment.

In his reaction, the Chairman of the Awka City Sports Club, Chief Emeka Obidike, who was full of appreciation to the benefactor for what he termed an unprecedented benevolence, prayed God to bless him the more.

Group tasks government on 35 per cent affirmation policy for women