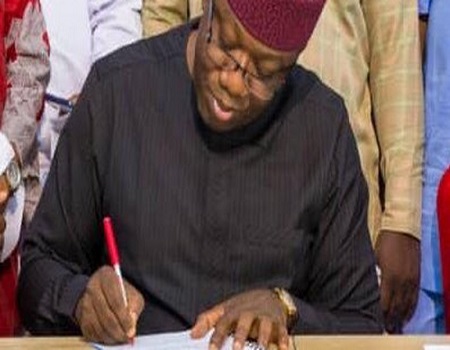 The Nigeria Governors Forum (NGF) and the Nigerian Centre for Diseases Control (NCDC) on Wednesday signed a Memorandum of Understanding (MoU) on the World Bank N3.7 billion COVID-19 response support to states and the FCT.

The Nigeria COVID-19 Preparedness and Response Project (NIGERIA CoPREP) MoU was jointly signed by the NGF Chairman, Governor Kayode Fayemi of Ekiti State on behalf of the 36 State Governors and the NCDC Director-General, Dr Chikwe Ihekweazu.

In his remarks, Dr Ihekweazu disclosed that each State and FCT will receive the sum of N100 million to enable them to access the fund, which would be paid directly to a dedicated account of each state government, after meeting the necessary requirements.

He said that the objective of the fund supported by the World Bank was to prevent, detect, and response to the threat posed by COVID-19 at the states-level in Nigeria.

“Since last year we have already said that our focus for this year would be on the states. Even before this outbreak, our strategic direction in NCDC was to support the state to build health facilities.

“We did not know where we will get the resources from and we did not know we will be confronted with an outbreak of this extent. Sadly, from January we have been faced with this challenge across the world.

“We have come to that realisation that we have to invest in the health sector. We can do that at the federal level alone. We have to do it at both states and even local government level,” Dr Ihekweazu said.

He said that the NCDC had come to a collective agreement with the World Bank to use part of the Regional Surveillance System Enhancement (REDISSE) project to accelerate the development of the state health facilities.

The NCDC Director-General also pledged to accelerate the process of ensuring that state access the fund to make sure that specifically, they respond to COVID-19 outbreak while future fund could focus on building states capacity in the long run.

In his remarks, Dr Fayemi commended the NCDC and the World Bank for their support to the states especially in tackling COVID-19 pandemic, described the fund as a vehicle for enhancement of infrastructure especially primary healthcare at the subnational level.

The NGF Chairman expressed optimism that the support fund when finally accessed by states would go along way in the development of the health facilities at the states level.

“For us what is critical is not just to see the end to this pandemic, if there can be an end. However, what is more, important to us is that we do not waste these chances, but to use it to build the health infrastructure all over the 36 states,” Dr Fayemi noted.

He said that the NGF recognised World Bank as a development partner and not a donor, adding that about 10 World Bank initiatives were going on in Ekiti state, which is also applicable to other states.

Dr Fayemi also pledged that the NGF was ready to provide its institutions as facilitating tools in engaging partners who want to access states.

In her goodwill message, the World Bank Operations Manager, Kathleen Whimp, explained that the signing of MoU was an opportunity for NCDC to reach for better and to strengthen its engagement with the states.

“It is not just about addressing the outbreak, it is also about forging links between Federal and State Governments, which is very critical for Nigeria’s development.”

She described the response fund as a big responsibility, particularly for NCDC Chairman and his team, while advising governors not to see World Bank team as bankers but as partners.

“See us as trusted partners that can help you access the kind of support that you need to make this program a success,” she said.

On her part, NCDC RESDISSE Project Coordinator, Kemi Ladedeinde, said there were two facilities supported by the World Bank to assist the COVID-19 response in the country through NCDC.

These, according to Ladeinde were RESDISSE, a five-year project with the objective of strengthening Nigeria’s disease surveillance, laboratory strengthening, preparedness and public health emergency response capacity.

“The second one is NIGERIA CoPREP, this a $100 million fast track facility under processing at the moment, which will be provided to all 36 states and the FCT.

“The project objective is to assist us to prevent, detect, and response to the threat posed by COVID-19 at the states level.

She said that the communication of the assistant fund was sent states on May 2, while the template for the expected plan was sent to states on May 15, adding that the grant agreement was also approved by the World Bank on June 11.

“So far, 34 states have submitted their prioritise plan for this N100 million except for Lagos, Yobe and FCT.

“What we are trying to do is to ensure that states can submit plans that will be fended by the bank. So we have been providing support.

“There are 24 states now at different levels of review with NCDC or States (nine with NCDC, 10 have been reviewed and returned to States concerned, four submitted their plans on the wrong template, and one submitted yesterday.)

According to Ladeinde, the requirements for assessing the funds by states include submission of quality IncidentAction Plans(lAp), the opening of account dedicated account and communicating the account details to NCDC through the Accountant General office.

Others include the signing of the grant agreement and the compliance with COVID-19 response strategy including test, contact tracing, active case search, among others.

She, however, explained that there were templates for the review of states submission which include finding out if the states use the template provided by NCDC if the IAP were properly costed, among others.