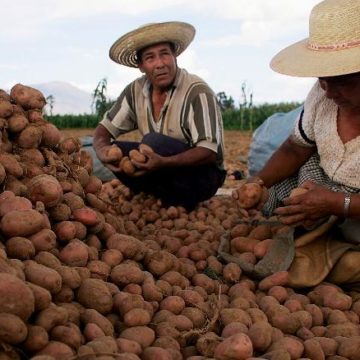 New York student Benjamin “Benjy” Firester has won one of the United States’ top young science prizes for his research on the devastating microorganism which caused the Irish Potato Famine, devising a computer model that could prevent it causing billions of dollars in lost crops every year.

The 18-year-old senior at Hunter College High School beat 1,800 students in the race to the $250,000 first prize at the Regeneron Science Talent Search, which counts 13 Nobel Prize-winners among its alumni. He also joins his older sister Kalia, who finished a runner-up in 2015, CNN reported.

Firester’s project, titled “Modeling the Spatio-Temporal Dynamics of Phytophthora infestans on a Regional Scale,” mapped disease data and weather patterns to predict where spores that cause potato late blight would spread to next. The study involved Firester using data from Israeli farmers and weather reports of the region, factoring in humidity levels and wind direction.

Potato late blight can destroy fields in days, and was central to the Irish Potato Famine in the 1840s when 2 million people died from starvation and disease. The problem of potato late blight, though not as acute, persists. One 2012 paper estimated the value of yield losses due to the disease could be as high as $6.7 billion annually.

Firester says in his project that farmers are currently forced to preemptively douse fields in fungicide, but suggests his mathematical model could be used in a decision support system where farmers share infection data, enabling them to make more informed decisions to protect their crops.

Potato farmers in Bolivia, 2005. A paper in 2012 estimated the value of yield loss to potato late blight could be as high as $6.7 billion annually.

“Benjy’s project melds several different STEM (science, technology, engineering and math) fields,” said Sudarshan Chawathe, chair of the judging panel. “His use of existing data to make predictions is innovative, and we are impressed by Benjy’s long-term commitment to his research.”

According to CNN report, the 77th edition of the competition, run by The Society for Science and the Public, reached its conclusion with a gala in Washington D.C. on Tuesday evening.

“To be completely honest I didn’t even think it was real at first,” said Firester about his win. “I could barely breathe; my heart was beating so quickly. It just seemed like a dream.”

Speaking in advance of the awards, Society president and CEO Maya Ajmera caveated that it was not just Firester’s research that sealed the win.

“It’s not only about the projects, it’s about the intense interviews (each finalist is submitted to). …They are asked questions about general knowledge, scientific issues, puzzles, you name it.”
“(The judges are) looking for the next generation of scientific leaders and Benjamin really exemplifies that,” she added.

Firester enters an esteemed alumni network alongside 39 other finalists, each receiving a minimum of $25,000 to put towards educational purposes.

Second place and $175,000 went to Natalia Dmitrievna Orlovsky from Pennsylvania, who examined the response of lung cells to vaping. Third place and $150,000 was awarded to Isani Singh from Colorado, who looked into the genetics of women with Turner Syndrome, a gene abnormality in which the second sex chromosome is missing.

The winner says he plans to use the $250,000 top prize to pay for college tuition — most likely studying mathematics and computer science at Harvard University. In doing so he’d follow in the footsteps of his sister, who enrolled in 2015 and studies chemical and physical biology and visual and environmental studies.

“She’s been one of my biggest inspirations,” he said. As for their parents, “they’re so proud of me,” he added. “My mom might have been the only person who ever thought this was possible.”