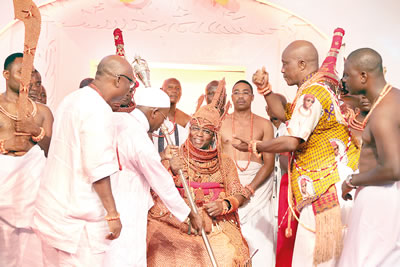 History was made in Benin on Thursday as the Benin Crown Prince, Eheneden Erediauwa, was crowned the Oba of Benin, Oba Ewuare II, at a lavish ceremony that was graced by crème de la crème of the Nigerian society.

The crowning of the new king had earlier been conducted at a private ceremony in the early hours of Thursday at the Usama Palace and was led by Chief Edionwe Oliha, who is the head of the Seven Kingmakers in Benin Kingdom.

Earlier before the presentation of the staff of office, final traditional rites preparatory to the ascension of the throne of his forefathers by the Crown Prince started at the Usama Palace at about 1:05pm.

From Usama Palace, Oba Ewuare crossed the symbolic Isekhere Bridge where he was ‘assis ted’ to cross the bridge by Chief Omoruyi Isekhere and Chief Samson Edogun, head of Ibiwe N’Ekhua.

Chief Samson Edogun had earlier led his Edogun N’Okakuo warriors, who were armed with shields and spears, to ensure free passage for the Oba to Benin.

From the Usama Palace, the new king thereafter trekked a distance of about seven kilometres to the venue of the presentation of office at the Urhokpota Hall, which is a short distance to the Benin Palace.

In his address before presenting the King with the staff of office, Governor Oshiomhole lauded the departed Oba Erediauwa, pointing out that he offered him support in transforming Edo State.

I’m happy that the new King was well prepared to step into the shoes of his father and work for greyer development of the Benin Kingdom and Edo State.

In his address, King Ewuare lauded the farsightedness and wisdom of his forefathers and Benin people for institutionalizsing a kingship succession process that is devoid of rancour.

He paid tribute to his late father, Oba Erediauwa, who he described as the true symbol of the culture and tradition of the Benin people, remarking that his visionary leadership, courage and dedication ensured the preservation of the legacies of several centuries

Oba Ewuare, who also reserved commendation for his late mother, Princess Ikuoyemwen Akenzua, who he said died in 1976 before the crowning of her husband as Oba, noted that his  mother taught him to work hard to achieve success in life.

The governor’s message of felicitation was contained in a statement issued in Asaba, on Thursday, by his Chief Press Secretary, Mr Charles Aniagwu.

The statement said that Governor Okowa, on behalf of the government and the people of Delta State, rejoiced with Oba Ewuare II and the entire Benin Kingdom on his coronation as the 39th Oba of Benin, by the Benin kingmakers.

He urged the Oba to commit himself to carrying his subjects along to a new era of peace, stability and progress in Benin Kingdom, Edo State and Nigeria as a whole.

He touched on the history of how the Obaship started in Benin, tracing it to Oranmiyan, pointing out that Oranmiyan was indeed the first Oba of Benin and he the 39th Oba of Benin Kingdom.

He said he would forge links with other institutions in Nigeria, Africa and beyond to strengthen contacts that will enhance excellent bilateral relationships.

On politics, he said he would uphold and maintain the principle of neutrality and non-partisanship in the activities of political parties, while stating that his people were free to subscribe to any political party of their choice.

He promised to initiate cultural renaissance that will focus on promotion of tourism through arts and crafts, disclosing that the Benin Royal Dynasty Trust and the Benin Royal Academy of Performing Arts have been established in this direction.

He regretted that there were pervasive poverty at the grass roots, astronomical rise in crime and juvenile delinquency in the society due to youth unemployment, adding that the solution lied in a well articulated and structured youth development and empowerment programmes.

He listed the transformation of the Gelegele Seaport into an Export Processing Zone for agro-allied industries as one of his major concerns.

He said, “Today is an important day for us. It marks a turning point in our lives. We will therefore do two other important things to mark this day.

“First, to honour the memory of illustrious father, we establish today Oba Erediauwa Annual Lecture Series. For this, the sum of N10 million will be invested in a trust fund and the proceeds will be used to support an annual well researched oration on any subject in Benin History, Public Administration or Edo Language.

“Secondly, we will unveil a new crest which states my motto: Amamieson Aimiuwa, Osakhue No Khuodin”, meaning: No Reward without Industry; God Protects the Defenceless.”