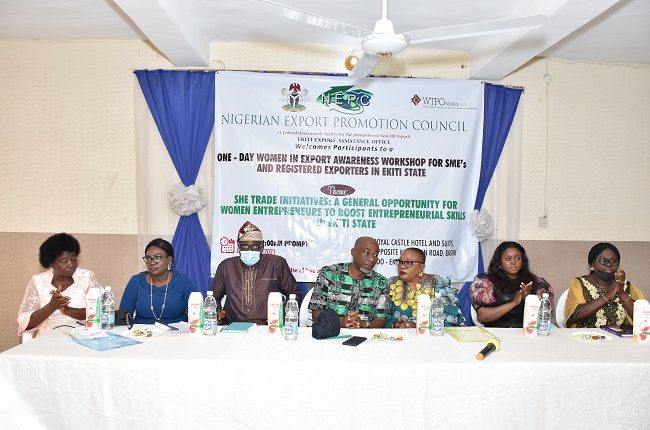 The Nigerian Export Promotion Council (NEPC) under the leadership of its Chief Executive Officer, Mr Olusegun Awolowo, has organised an export awareness workshop for women entrepreneurs in Ekiti State to expose them to export opportunities in their products.

The NEPC trade promotion Advisor for Ekiti State, Mrs Abe Abiola Iyabode, who spoke during the one-day workshop in Ado-Ekiti, on Tuesday, said the effort was part of the plans by the council to ensure the diversification of the economy through the promotion of the non-oil sector for economic growth.

The workshop which was well attended by women in Small and Medium Enterprises (SMEs) has a theme, ” She trade initiatives: A general opportunity for women entrepreneurs to boost entrepreneurial skills in Ekiti State.”

She explained that women are key to the development of any economy in view of their industrious nature and that they must be exposed to best practices on how they can manage and package their products to the international market.

According to her, “The NEPC in its untiring effort to boost the percentage of our success in the non-oil sector, export competence development programs for SMEs and women entrepreneurs cannot be underestimated.

“This workshop is planned to gather women entrepreneurs and registered exporters in Ekiti State to brainstorm on issues that are critical to the sub-sector as a valuable element of economic diversification programs of the government.

“The outcome of this event today will go a long way at improving your capacity and further move our export promotion drive forward.”

Abe expressed the continued resolve of the council to further boost the capacity of entrepreneurs, support farmers and exporters in line with its ‘zero oil plan’ programme which was aimed at,” taking the country back to a sound and prosperous economic pedestal.”

On his part, the Commissioner for Investment, trade and industry, Mr Muyiwa Olumilua while commending NEPC for the initiative said it would further exposed the women to practical tools on how to improve their competitiveness in the export market.

He lamented the effect of gender inequality on the nation’s economy, revealing that the country is losing about 30% in potential human development as a result of gender disparity, reiterating that government at all levels must be interested in the development of women for transformation of the economy.

Olumilua disclosed that his ministry has partnered with Ecobank to provide microloans for women, urging the participants to take advantage of the opportunity in a bid to improve their businesses.

On her part, the representative of the wife of the Ekiti state governor, Dr Abimbola Oni, hailed the council for coming up with the workshop, saying the women have a critical role to play in the development of the country, hence the need for their empowerment.

According to her, Mrs Bisi Fayemi, is committed to the empowerment of women and that everything possible would be done to sensitise the womenfolks on opportunities that will enhance their products not only to the local market but for export.

University of Buckingham alumni get new excos in Nigeria