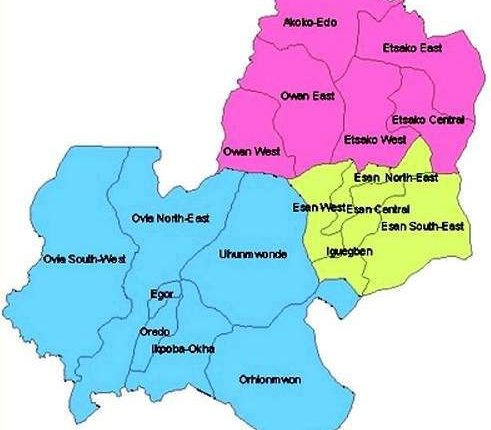 Over 200 women and youths have been trained in agricprenuer by the New Partnership for Africa’s Development (NEPAD), in Edo State, in conjunction with the Deputy Majority Leader, House of Representatives, Hon. Peter Akpatason.

The training, which began on Monday, saw 200 selected women and youths from across the 10 wards of Akoko Edo Local Government Area of the state gather to attend the program which was designed to empower them in agricultural ventures and small scale tradings.

The training, the second phase in a series of empowerment training, in the space of fewer than three months, it was gathered, would see that the sum of N300,000 is released to each beneficiary to venture into the business of Agro produce export, after the training which would last for a week.

The training, held in three different centres at Igarra, was designed for all Akoko-Edo people irrespective of their party affiliations.

The Local Organising Coordinator, Sunday Mayaki, said that the training “is in line with President Muhammadu Buhari’s principle of accommodating all Nigerians in his empowerment programmes and policies, regardless of political affiliations. Hon Akpatason has promised never to abandon his people, and that he is fully committed to, for as long as he is given the opportunity by the people to serve them”.

Hon. Akpatason, who was represented by  Mayaki, in his opening remarks, promised never to abandon his people.

“This training is a programme that has benefited many and by the Grace of God, it will also benefit you all. We enjoin all to attend training without a default as defaulters will not get certificates attached to the training,” Akpatason said.

While addressing the trainees, one of the resource lecturers, Mr Godfrey Akalomi,  said the event was to identify, train and empower starting businesses and ventures to know how to source and organize the required resources.

Some of the beneficiaries, Mrs Judith Efe, Mrs Onize Sule, and Mrs Awe Merry amongst others who expressed their joy and delight said the entrepreneurship programme was a welcome development and expressed gratitude for the various skills they would learn during the period of the training.

It would be recalled that the lawmaker had earlier empowered over 100 participants in the first phase of the training, which was held in October 2020.

Over 40 women and youths were immediately given start-up cash of N300,000 each, to go and start their business.