Negotiating with bandits will make insecurity worse —Ogoga of Ikere-Ekiti 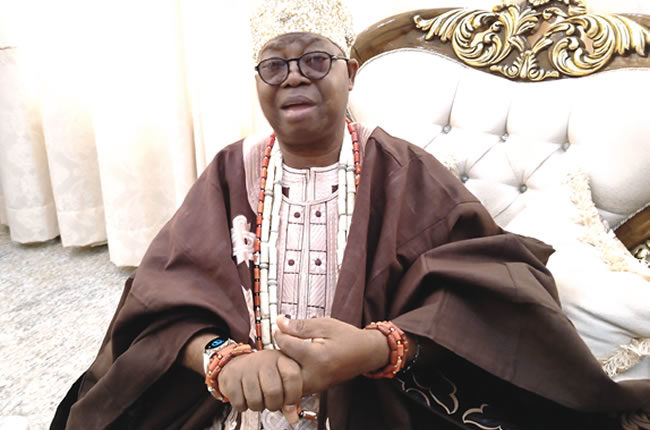 Oba Samuel Adejimi Adu Alagbado, the Ogoga of Ikere-Ekiti in Ekiti State, speaks to ‘YOMI AYELESO on the recent huge donation by the community to the newly established Bamidele Olumilua University of Education, Science and Technology, solutions to growing insecurity and other issues.

It is noticed that government has been negotiating with kidnappers and bandits to free abducted people, what do you think about this as a traditional ruler?

For me, negotiating with those bandits will only make things worse. Personally, I think the Boko Haram, bandits and criminal herdsmen are the same, the same ransom they are picking is what they use to buy more arms to inflict pains on Nigerians. When you look at those kidnappers from photographs we have seen, after collecting millions from people, they still look wretched and unkempt. We are told they pass the money to their financiers and sponsors who will use it to annihilate the country. As for me, the greatest and quickest solution to any problem is to tackle it from the source. What are the sources of these problems?  We have been told that these people are not from Nigeria, but I keep on asking why is our country open to foreigners who are terrorizing us? Let me say that the centralization of authorities with regards to security is against the progress of what we can achieve and my suggestion in this regard is based on what we proposed in the  Ekiti State Council of Traditional Ruler, don’t forget we conceived the idea of Amotekun and we submitted the proposal to Governor  Fayemi, though we did not call it Amotekun. The truth is, we know our town, for the umpteenth time, I believe things have gone haywire and we need to take native method to deal with this menace. When I say native method, I mean we have hunters and local vigilante that know the territory. We will have clusters of these vigilantes that can move en masse to comb the forest with the support of the police and of course, we heard there is now community policing officers but we have not seen the effect. Look, the truth must be told, it is traditional rulers that know their people, land and the people to call to solve these things. What we are asking for is the freedom and the authority to equip ourselves legally to face these challenges. I expect the Yoruba people to close ranks and stop talking in the newspapers but do something and take drastic measures, especially the lawmakers, to make laws that will give local people to arm themselves to face these criminals, if we are unable to do that, this thing will continue to spread.

Ikere-Ekiti community recently donated 60 million naira to the Bamidele Olumilua University of Education, Science and Technology as the first tranche of the 500 million naira promised. Why did the community decide to support the institution financially?

Ikere-Ekiti community is noted for education and without sounding immodest, we have over one hundred professors in the community, even in the law profession we have almost 80 with five Senior Advocates of Nigeria; so education has been part of us. On my ascension to the throne, we were making efforts to have our own university  and we set up a committee then but the governing council led by Chief Ojuawo came to my palace, I told them that one thing I will request from them is the upgrade of the college of education to a university, this is because I realized that the traffic in terms of the students population was dwindling because people will rather send their children to university than college of education and the governing council took it as a passion.  At a point, he asked me how are we going to support and I told him we will support in any way you want. Eventually, he told me that the governor asked about the assistance the community is going to offer, this is where we rose up because I know the government alone may not be able to fund everything and we started mobilising ourselves to let them know the advantage of having that place as a university and the necessity to come together and raise funds to support whatever government will be giving to the new university.

What are your expectations from the management of the university?

We expect prudence, we expect that the funds will be judiciously used and I have no doubt about that because of the track record of the chairman of council and the vice chancellor. They have denied themselves the benefit accrued to their office even since the place was a college of education. Our expectation, like I said, is that the money will be used for development, to put the university on a strong and good footing. I also expect that the various colleges, especially the science and technology aspect to ensure that the products of that university would make meaningful impact, not only in Ikere, but in Nigeria.

What are your expectations from the state government on the new university?

The most important thing we are requesting from the government is security. We know the situation of things in our country today, especially the activities of the herdsmen. We don’t want that to start happening in Ikere and we are appealing to the governor to partner with us because we know our town, to make sure there is no impunity. For the university, we want a security structure that will involve our local people that will ensure the maximum security of lives and property of students, staff and of course the visitors.

How is the Ikere community receiving the news of Chief Wole Olanipekun as the pioneer chancellor of the university?

That is one of the wisest decisions the governor has made with regards to the university. I say this without any equivocation because Chief Olanipekun is an educationist. This is a man that is playing this same role as pro-chancellor in the University of Ibadan and instead of earning the mandatory stipend; he refused to take any money. Rather, he asked them to use his entitlement as scholarship to needy students in the university.

He also built a 350-capacity hall in the university and I also know that in Ajayi Crowther University, Oyo, he single handedly built the vice chancellor’s lodge. Look at his scholarship for students in Ikere-Ekiti, this year makes it the 25th year of the commencement, don’t forget it is not only for Ikere people but nationwide. So, bringing him into the university at this stage as a pioneer chancellor , it is putting a very round peg in a round hole and I know from his records and past achievements, he is going to help, hasten and ensure the development of the new university.

In Oyo, foundation starts empowerment of 50 people in each LG, LCDA