NEC approves N100bn for implementation of NLTP as Osinbajo presides 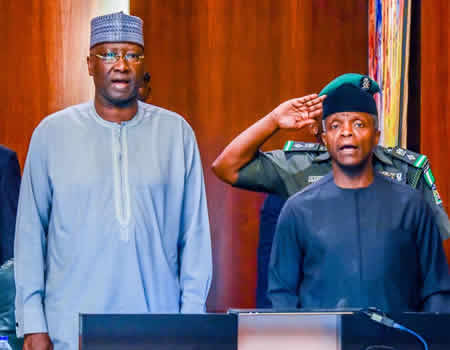 THE National Economic Council (NEC) presided over by Vice President Yemi Osinbajo, SAN, has voted the sum of N100billion for the implementation of the proposed National Livestock Transformation Plan.

He noted that plan was not targeted only on cows but a wholistic strategy to address animal husbandry, adding that this was targeted at supporting the development of Nigeria’s livestock sector.

The Federal Government had recently launched the programme at the Gongoshi Grazing Reserve in Mayo-Belwa Local Government Area of Adamawa state.

The concept is designed to run from 2019-2028 as part of the federal government’s initiative in collaboration with States under the auspices of the National Economic Council.

Umahi noted that it would be implemented in seven pilot states of Adamawa, Benue, Kaduna, Plateau, Nasarawa, Taraba and Zamfara states.

He said it has six pillars through which it aims to transform the livestock production system in Nigeria along market-oriented value chain while ensuring an atmosphere of peace and justice.

He said the six pillars to include: economic develop (investment), conflict resolution, justice and peace, humanitarian relief and early recovery (that is to IDPs), human capital development and cross-cutting issues such as gender, youth, research and information and strategic communication.

“Council resolved today that there is need to look at the trans-human West African protocol, you cannot allow such movement of cattle without registration and monitoring; Council emphasised the need to continue to establish that the National Livestock Transformation Plan (NLTP) is a creation of NEC and state governors and of course Ministers of Agriculture and that of Interior are members of the committee, and it is entirely distinct from Ruga.

“NEC adopted the National Livestock Transformation Plan (NLTP) January 18, 2019, and it is a creation of a national economic council of course in liaison with the federal government.

“States will determine whether or not to participate. The federal government did not impose this plan, participation remains voluntary. What we are talking about is National Livestock Transformation Plan (NLTP) which is a product of NEC in liaison with federal government”.

He said vandals were ripping Nigerians off, causing huge revenue losses, stressing that the Nigerian National Petroleum Corporation (NNPC) reported to the Committee the loss of 22.6 million barrels of crude oil valued at approximately $1.35 billion in the first half of this year.

According to Obaseki if this situation is not contained in two years we would have lost in excess of $2.7 billion.

The adhoc-committee also reported that the governance structure of the pipeline is such today that no one is held accountable whenever there are bridges and when these losses occur.

The Edo state governor also explained that the slow and inadequate prosecution of vandals, despite numerous arrest and seizures continue to encourage this menace.

He said the absence of petroleum products filling stations in most of the oil producing communities around the Niger Delta make them resort to illegal bunkering and illegal refineries.

He equally noted that huge internal and external market of stolen products exist across the west coast of Africa and also the sub-region.

The Committee which was constituted to address the impact of vandalization, oil theft, illegal bunkering on oil production, was saddled with the task of restoring and sustaining the four major trunk pipelines which moves crude oil to the terminals, to access the challenges and draw up a road map to guide further actions towards finding a lasting solution towards the problem.

Among recommendations the committee came up with was a need to restructure the maintenance and ownership of oil pipelines as a way of tackling the perpetrators of crude and other products.

“There should be a legal framework that will ensure that criminals are duly prosecuted, imprisoned and their assets confiscated. There should be special courts to try offenders and have a special legal task force to coordinate the prosecution of arrested offenders as well as trained special judges to handle cases of oil theft.

“The NNPC is expected to encourage and engage with the national intelligence agency (NIA) to identify the markets for stolen petroleum products across the continent.

“While governors of the oil-producing states should set up actions to develop the communities that are most prone and through which these pipelines run with their 13 percent derivation allocation as well as implement programmes that will be impactful and make life easy for the people. It noted that the NDDC in the Niger Delta Development Corporation which has the mandate to undertake development in this region should be restructured to perform its role better,” he stated.