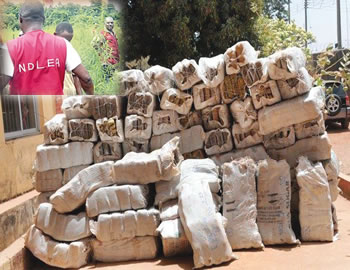 The state Commander of NDLEA, Mr Suleiman Jadi told the News Agency of Nigeria (NAN) in Birnin Kebbi on Saturday, that the suspects were intercepted in Yauri Local Government Area of the state on their way to Sokoto State.

“Our men on patrol have succeeded in intercepting two suspected drug dealers with 40 laptops compressed with hard drugs weighing about 40 kilogrammes.

“They were intercepted in Yauri Local Government Area of the state on their way from Lagos to Sokoto State,’’ he said.

Jadi said the suspects had confessed to their crime.

“They confessed that this is their second time of moving such quantity to Sokoto state this year.’’

According to him, the suspects will soon be charged to court on conclusion of the investigation.

The commander also called on members of the public to always supply the command with useful information on activities of drug dealers in their communities.

NAN reports that the agency had between January and June arrested 59 suspected drug dealers and seized 236.7 kilogrammes of illicit drugs and psychotropic substance in the state.