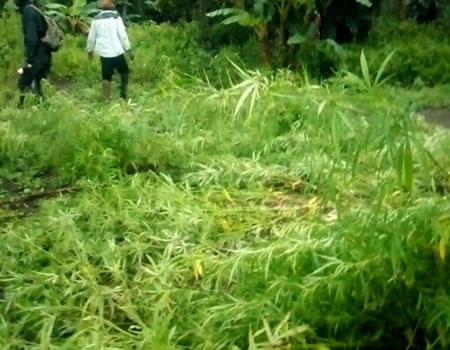 THE National Drug Law Enforcement Agency, NDLEA, Osun State Command on Wednesday disclosed that it has destroyed 16.8 hectares of cannabis farm located at Ikoyi in Isokan local government area of the state.

The state commandant of the NDLEA, Mr Samuel Egbeola disclosed this during an interview with journalists at the agency’s office in Osogbo.

Egbeola hinted that the cannabis farm was destroyed on the 26th of September as a result of a tip-off from an intelligent source.

He said the agency equally impounded 25 kilograms of already harvested cannabis found on the farm but because no arrest had been made in connection with the seizure.

The NDLEA boss however reassured the people of the state that the agency would always be alive to its responsibilities in ensuring a drug-free state, just as he called on the public to always provide the agency with information on illicit drug plantations.

According to Egbeola, “We are using this medium to appeal to the people of the state to always relate information on plantations, especially Cannabis plantations to the agency. Our office is at the testing ground area in Osogbo and it is always open.

“Lets us work together in ensuring a drug-free State. We express our gratitude to those who have been giving us information.

“We also use this medium to solicit for the support of the press. It is our mandate to rid the state of illicit drugs and this could only be made possible with your support and cooperation,” Egbeola remarked