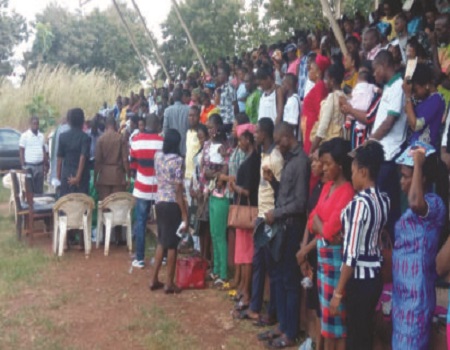 Determined to provide more profitable farms and promote environmental stewardship, the National Directorate of Employment (NDE) has kick-started the training of 50 unemployed youths in Edo on agricultural production and distribution system.

Speaking yesterday in Benin during the commencement of the training, the director-general of NDE, Mr. Nasir Mohammed explained that the programme will involve arable and livestock production for three months.

Represented by the state coordinator, Mrs Ayo Edegbai, Mohammed added that the training would enhance quality of life for farm families and communities.

He encouraged participants to key into the programmes, adding that agriculture and its value chain would put food on their table and make them to live above poverty as well as eventually be employers of labour.

According to him, the training is a paradigm shift to a more sustainable Agricultural Training Scheme.

“The Agricultural training will be a landmark also a great milestone in its employment generation and poverty eradication in the nation.

“The diversification of economy which is a major policy of Federal government gives agriculture a pride of place right now.

“We all now know the agricultural sector can easily mop up the unemployable situation in our land,” he said.

He reiterated the commitment of NDE to empower various categories of unemployed and vulnerable persons through its various programmes.

He said that the empowerment was under the Sustainable Agricultural Development Training Scheme in line with the directorate’s objective in creating jobs.