NDE trains 154 on agriculture, environmental beautification, urges them to be serious 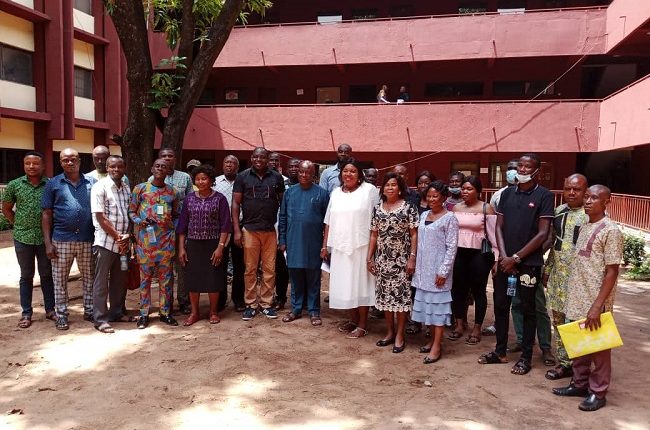 Participants at the three-month-long training in Imo State, have been admonished to take the training seriously and avail themselves of other opportunities offered by the National Directorate of Employment, (NDE).

The Acting Director-General of the Directorate, Mallam Abubakar Fikpo, said this at the official launching of its 2021 Sustainable Agricultural Development Training Scheme in Imo.

Fikpo, represented by the NDE coordinator in Imo State, Mrs Ngozi Ihenacho, thanked the Federal Government for its youth-friendly initiatives. He also thanked the NDE in Imo State for the transparent selection of the100 beneficiaries of the scheme, while pledging to work together with the state government to achieve the desired results.

He stressed that the programme was in line with Federal Government’s policy on agriculture for employment, wealth creation and food sufficiency, and promised to work with the state government for the best results.

In his rears, the Director of the REP Scheme Department, Mr Michael Mbata, said that the first two weeks of the programme would focus on theoretical training, while the remaining period would be for activities at the adaptive farm.

Mbata, who was also represented by a deputy director in the department, Chukwuma Jinanwa, assured that the NDE would not relent in its constitutional mandate of imparting skills that could translate into self-employment.

He added that the training curriculum was structured to include major areas of modern agricultural production, crop farming, livestock production, apiculture, marketing and Agri-perineurial training.

He urged young school leavers and graduates of tertiary institutions, with a passion for agriculture as an enterprise, to embrace the programme so as to learn vital skills.

He said: “100 persons have been selected from each state of the federation and the Federal Capital Territory, just as in Imo, giving a total 3,700 persons.”

He advised them to take advantage of the opportunities presented by the NDE, in various areas of agriculture, to better their lives.

Similarly, the Directorate has begun training 54 persons in Imo State under its Environmental Beautification Training Scheme.

The 54 beneficiaries according to the Acting Director-General, were part of the 1,548 trainees recruited nationwide in the ratio of two trainees from each local government area.

He also said that the scheme was part of the Federal Government’s efforts to reduce unemployment through skill acquisition and resettling of successful trainees to enable them to start up their own businesses.

He added that the 54 trainees were recruited in the state at two persons per LGA as there are 27 LGAs in the state. adding that it was a laudable achievement of the Federal Government in the area of job creation through skill acquisition.

Speaking, the Head, Department of Special Public Works, host department for the scheme, Mallam Idris Wase, said that the beneficiaries would be trained in the broad areas of soft landscaping and hard landscaping.

Wase who was represented by a deputy director in the department, Mr Anthony Okum, said that areas such as horticulture, painting, designing and construction of culvert rings will be captured in the training.

He further said that successful trainees from the year 2020 EBTS training had already been resettled with equipment such as water pumping machines, flower pots, and moulds among others.

According to him, paid trainers would equip trainees with viable skills in the broad areas of soft landscaping and hard landscaping for a period of three months.

One of the trainees, Mr Michael Uzondu, from Owerri North Local Government Area, LGA, thanked the Federal Government and pledged unflinching commitment to the training.

In spite of the huge investment in the water sector by the government and international organisations, water scarcity has grown to become a perennial nightmare for residents of Abeokuta, the Ogun State capital. This report x-rays the lives and experiences of residents in getting clean, potable and affordable water amidst the surge of COVID-19 cases in the state… NDE trains 154 on agriculture, environmental beautification, urges them to be serious

The Lagos-Ibadan railway was inaugurated recently for a full paid operation by the Nigerian Railway Corporation after about a year of free test-run. Our reporter joined the train to and fro Lagos from Ibadan and tells his experience in this report…  NDE trains 154 on agriculture, environmental beautification, urges them to be serious

Community stage protest against arrest of indigenes in Osun