•As Akeredolu assures Ondo South that electricity will soon be restored 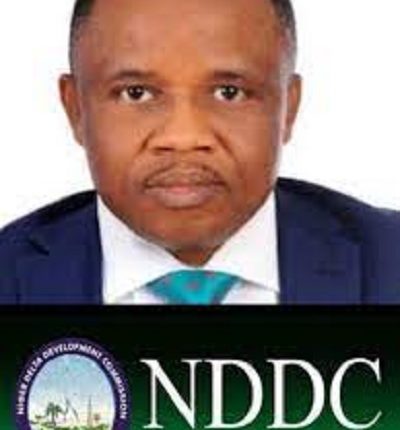 Akwa who stated this in Akure, Ondo State capital, during a courtesy visit to the Ondo State Governor, Mr Rotimi Akeredolu, said the Commission would accommodate inputs and involvement from all relevant stakeholders, saying this would help to integrate plans, policies, projects and programmes into the government’s overall master plan.

The NDDC boss who revealed that the visit was part of the Commission’s continuing engagement with stakeholders of the Niger Delta region said “this is important because the partnership is key to development.

“It rekindles our long-held tradition of brotherhood. It reaffirms that we are our brother’s keeper. This is who we have always been as Niger Deltans.

“Importantly, also, the partnership is a key aspect in United Nations’ Sustainable Development Goals (SDGs). It advocates for a shared vision, shared responsibility, shared commitment, as well as a shared budgeting process and implementation of development initiatives.

“This way, we are able to do far more, with far fewer funds, than if we were duplicating projects and working alone. That was the spirit in fashioning a Master Plan for the Niger Delta, the vision of our shared allegiance to this great region.

“After so many years of neglect, it is important that, together, we do far more for our people.

“It is important that we do more for a region which has provided the bulk of Nigeria’s wealth and accounted for our rise in the comity of nations.

“Our visit is both to acknowledge your strategic importance to Niger Delta development, as well as to seek ways in which we can forge a stronger alliance with the government and people of Ondo State.

“We offer both our hands and seek embrace, so that, together, we can build a region of which we can be eminently proud. We are determined to continue to make a difference in the Niger Delta region in general, and in Ondo State, in particular.”

Speaking, Governor Rotimi Akeredolu assured the people of Ondo south that with the visit of the NDDC team to the 132KVA transmission station situated Ode-Erinje in Okitipupa Local Government Area of the state, power would be restored in the Southern Senatorial districts of the state within the next few months after over ten years of darkness.

Akeredolu who lamented over the power outage in the southern part of the state for a long while assured that electricity would be restored immediately after the 132KVA transmission station in the area is completed, which he said would soon be ready.

“Our people from the south can be very hopeful. On our own we have done some mini-grids here and there but how much will mini-grids do, and through the World Bank, we are still doing some other grids like solar.

“We cannot go and be looking for 30 KVA from Omotosho. We have 132KVA that can give us about six legs and can project to anywhere in the south. So, let our people in the south know, light is coming soon. When this is completed before the end of the year, I’m assured that there will be light.”

The governor, however, enjoined the NDDC to look inward and explore avenues of making money for the overall interest of the mandate areas, rather than the mandate areas depending on the commission for money.

According to him, such a move will better enhance the NDDC’s developmental drive across the mandate areas and emphasized that with the abundant potentials littering the state, the commission can partner the state and invest in some areas.

He said “In Ondo State we have potentialities. Not only even oil, but our potentials are also diverse and we are ready to put it before you so that we can work together.

“I know that NDDC has not been making money but it has been giving money out. But in Ondo State NDDC can make money by investing.

“We can have a joint investment that NDDC will make money from. We have potentials, there is nothing stopping NDDC from buying into our bitumen. Our investment in bitumen might be what we will be relying on later in life as people are looking for a zero oil economy.

“The Araromi seaside tourism, we develop it together. These are areas of interest for me. We have suggested many other areas where we can work together. I can assure you that here in this state, a lot can be done.

“I look forward to working together. We want you to help establish a Project implementation and monitoring unit in the state as part of your CSR which will also go round the other Niger Delta States.

“Our belief in this state is that this is a new era in NDDC for quantifiable economic growth and strategic developmental focus.”

In spite of the huge investment in the water sector by the government and international organisations, water scarcity has grown to become a perennial nightmare for residents of Abeokuta, the Ogun State capital. This report x-rays the lives and experiences of residents in getting clean, potable and affordable water amidst the surge of COVID-19 cases in the state… NDDC to involve states, stakeholders before project execution

Ibom Air set to interline with another carrier