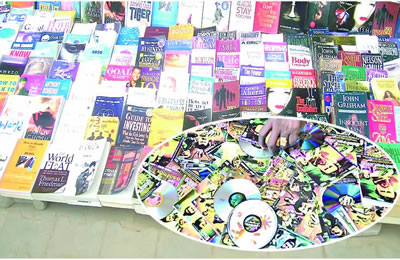 Operatives of Nigerian Copyright Commission (NCC) have arrested 15 suspected pirates during simultaneous enforcement operations carried out in piracy hotspots in Lagos and Onitsha.

Pirated Christian devotional books estimated at about half a million Naira were confiscated by copyright inspectors on August 28 during anti-piracy raids executed with armed police backup in Idumota and Ajegunle, Lagos as well as at different outlets in Onitsha Main Market, on Kanu and Moore Streets, Onitsha, Anambra State.

In a statement made available to R, it stated that the operations were sequel to surveillance activities and intelligence gathering based on petitions by stakeholders complaining of piracy of their copyright works in the states.

In Lagos, the Director of NCC Lagos Office, Mr. Matthew Ojo, who coordinated the two enforcement operations in Idumota and Ajegunle book markets indicated that six (6) suspected pirates were arrested and copies of a prayer book, ‘’Devotion to the Most Precious Blood of Our Lord Jesus Christ’’ estimated at  two hundred and sixty thousand Naira (N260,000) were confiscated.

In a similar enforcement raid in Onitsha, Anambra State, the Commission’s operatives arrested nine suspects with suspected pirated copies of the prayer books.

The State Coordinator, NCC Onitsha Office, Mr. Gabriel Anikwem, who led the anti-piracy raid, stated that the seized prayer books: “The Voice of the Little Lillies”, “Devotion to The Most Precious Blood of Our Lord Jesus Christ’ and “The Chaplet of the Precious Blood of Jesus Devotion” were estimated at N228,000.

In his remarks, Director-General of Nigerian Copyright Commission, Mr. John Asein said the raids executed simultaneously in the two states were clear signals on the renewed anti-piracy campaign of the Commission geared at stamping out all forms of copyright piracy in the creative sector.

He urged the public to desist from patronising pirated copyright works and stressed that the Commission remained committed to proactive implementation of its statutory mandate “to ensure that right owners, many of whom are yet to recover from the disruption occasioned by the COVID-19 pandemic are not further traumatised by the activities of pirates”.

Prophet Jonathan: How his predictions about Nigeria are coming to pass

What caused my rift with Oshiomhole — Obaseki