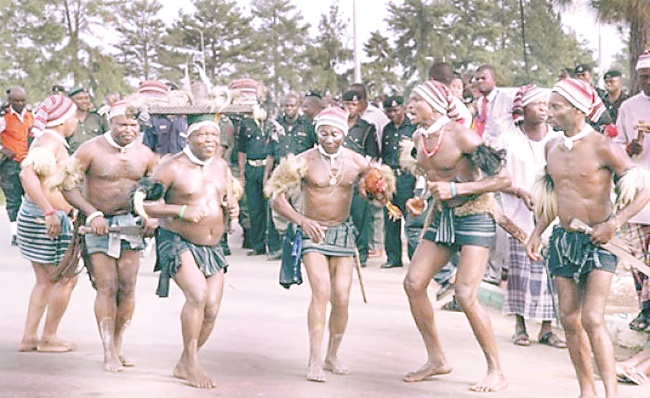 The Ohafia Heritage Festival and Slave Route Tour (OH-FESRT), will provide local and international tourists with the opportunity to experience the famous Ohafia War Dance (Egu Ikperikpe Ogu), a traditional dance festival that evolved from the Trans-Atlantic Slave Trade era.

The festival will also offer tourists the opportunity to visit historical sites in Ohafia and Abia North senatorial district associated with the slave trade era.

The NCAC boss, Chief Runsewe, currently spearheading usage of culture and arts for economic benefit of the country, said the heritage festival would help to further project our culture and tell our story as a people.

Speaking on the festival, the project co-ordinator, Mr Okorie Uguru, said the festival will provide a platform to celebrate the culture, history, craftsmanship and rich artistry of Ohafia people and by extension, the Old Bende Region (Abia North Senatorial Zone).

“While the festival will showcase an assemblage of Ohafia War Dance troupes from 27 communities of Ohafia, the slave route tour will cover Uzuakoli, Bende, Ohafia and Arochukwu towns to see key places and artifacts from the Trans-Atlantic Slave Trade era.

“Since Ohafia and the whole of Abia North were very active during the Trans-Atlantic Slave Trade era, with evidence of the relic, artifacts and outposts still preserved, our aim is to create a tourism economy in Ohafia and Abia North.

Currently in the Old Bende region, the economy revolves around farming, trading, small and medium scale enterprises (SME) and civil service; tourism, through the festival and package tours, could boost the economy of the people by directly attracting tourists that would spend their money within the region. This would stimulate the economy and the proceeds go directly to locals to help improve their livelihood.

“Globally, tourism is known to be the biggest employer of labour, also has a direct economic impact on the host communities OH-FESRT will provide entertainment and improve the economy of the region. In addition, many places in Nigeria are losing their history and identity as a result of westernisation. There is no better way to preserve and celebrate our history than actively reliving it through the traditional dance.”

Speaking on the war dance, Uguru explained “The Ohafia War Dance is a spectacle we want to package properly for tourists to enjoy. It is a heritage that represents the antecedent of the people of Ohafia and the larger Old Bende region.

“The electrifying cultural dance showcases history, music, choreography and creativity. It is from this music and dance that the oral history of the Ohafia and the Old Bende region were passed from one generation to another.

“The creativity is in the oral history rendition which includes accuracy, creativity, dance steps and costumes. Apart from the touristic value, the festival is educational as our youths would use the opportunity to imbibe the history of our people.”

Further, on the history behind the dance, Uguru said “Ohafia people are warriors and their exploits are succinctly captured in the oral tradition passed through panegyrics. Ohafia warriors were mercenaries during the slave trade era.

“They were engaged by the Arochukwu slave traders for punitive and slave raids. It is from these war exploits that the Ohafia War Dance Ikpirikpe Ogu or Iri Agha originates.

“With the coming of modernity, the war dance eventually became a blend of entertainment, artistry and musical creativity. The Ikpirikpe Ogu has become one of the leading dances to showcase in Igboland.

“Apart from wars, as earlier stated, Ohafia people are very artistic, most especially in the area of wood carving. The testament to this could be seen in the close to 20 feet wood carving adorning the entrance of the National Museum Onikan, Lagos. The Omo Ukwu temple in Asaga and the Obu Nkwa in Elu Ohafia also attest to this.

For Ohafia people, history is captured in dance and merriment that extol the exploits and conquest of the ancient warriors. The dance celebrates the history.

The British Parliament at the Westminster Hall held a debate on ‘e-petition 554150, relating to Nigeria and the sanctions regime’ on Monday. The government of the United Kingdom has however responded…Potter Media partner  Potter Media partner

The surprise visit made on Friday night by the leaders of the ruling All Progressives Congress (APC) to former President Goodluck Jonathan at his residence in Abuja triggered a stir in the major political camps, resulting in at least four possible theories..Potter Media partner    Potter Media partner