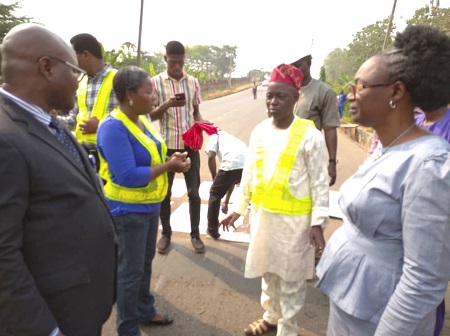 The chairperson of the National Association of Women Journalists (NAWOJ), Oyo State Chapter, Mrs Jadesola Ajibola has commended the rector of The Polytechnic, Ibadan, Professor Kazeem Adekunle Adebiyi for keying into the zebra crossing project initiated by the association in the state.

Ajibola gave the commendation while speaking at the inauguration of three zebra crossings located between The Polytechnic Ibadan/Ijokodo/Apete roads.

Mrs Ajibola said the intention of her association was to contribute to the efforts being made by the government to protect the lives of the people on the roads, adding that the effort of the management of The Polytechnic, Ibadan was in consonance with the programme of her association.

In his response, the rector of the polytechnic, Professor Kazeem Adekunle Adebiyi gave kudos to the NAWOJ leadership for the initiative.

He assured the association that the management of the polytechnic will always support efforts geared towards the betterment of the society.