Navy hands over smuggled rice, other items worth N15m to NCS 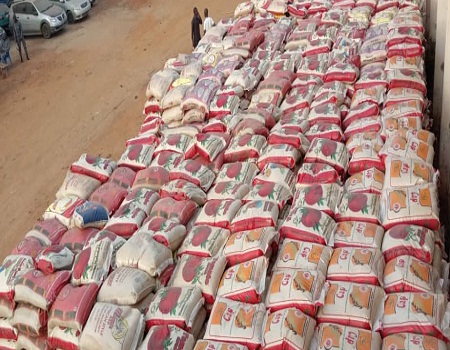 The Nigerian Navy in Lagos, on Thursday, intercepted and handed over some smuggled rice, turkey, boats and other items worth N15 million to the Nigeria Customs Service (NCS).

The Commanding Officer, Naval Forward Operating Base (FOB), Capt. Chris Akokota, who handed over the smuggled goods to the NCS in Badagry, Lagos, said that the seizure was made possible due to heavy naval patrols.

“The FOB, in fulfilment of the navy’s policing role, has increased patrols on the waterways, extending from Lagos to the Republic of Benin border.

“This has led to several arrests, which were handed over to Operation Swift Response in the past.

“Equally, the base has within the last two months, made additional arrests, which would be handed over to Operation Swift Response,” he said.

The News Agency of Nigeria (NAN) reports that Operation Swift Response is a joint task force, comprising all security agencies, including the customs.

Akokota said that since the commencement of the operation, several arrests and seizures of contraband goods had been made.

“These arrests and seizures had been made within the Nigeria-Republic of Benin border at Seme and its environs by personnel of the armed forces and other security agencies in the base’s area of operation.

“The suspects, while sighting our men, fled and escaped, leaving the smuggled goods behind.

“The items to be handed over are fibre speed boats, fitted with outboard engines and one Toyota Sport Utility Vehicle.

“Others are electronics and electrical fittings, bags of foreign parboiled rice, cosmetics products, bales of used clothes and cartons of frozen turkey,” he said.

The commanding officer said that the items were estimated to have a market value of N15m.

He expressed gratitude to the Chief of the Naval Staff, Vice Adm. Ibok-Ette Ibas, for providing the required logistics support to enable the base to conduct the operations.

“I want to warn criminals to desist from illegalities, as the navy would continue to deal decisively with them.

“Conversely, I want to assure law-abiding citizens of the navy’s resolve to create the right atmosphere for legitimate businesses to thrive,” Akokota said.

The Deputy Comptroller in charge of enforcement, Rasheed Adahuse, who received the smuggled goods, said that the customs would continue to synergise with the navy to ensure the safety of the nation’s territorial waters.