•Enjoins FG to focus on other untapped minerals 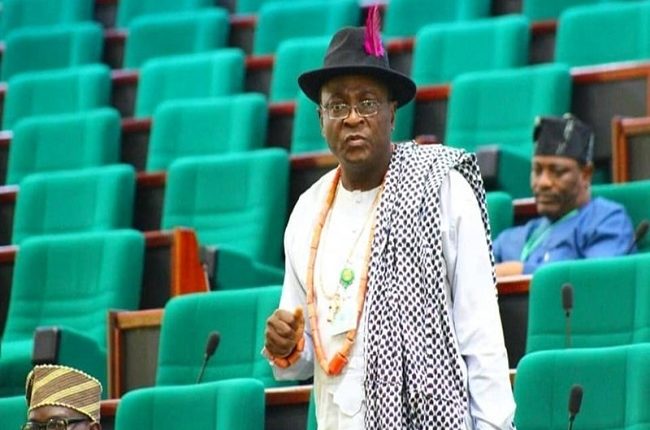 A member of the House of Representatives, Reverend Francis Waive, on Saturday, declared that the controversial National Water Resources Bill 2020 is of no immediate benefit to Nigerians.

He anchored his submission on the fact that the country has yet to effectively manage existing resources why trying its hands-on water resources.

“In my opinion, the bill is of no immediate benefit to the generality of the populace at this point in time, plus we have not developed enough as a country to be able to properly manage all the resources we have to now begin to look at the water.

“Water is the least of our problems as a country,” he noted.

Rev. Waive, a chieftain of the All Progressives Congress (APC), represents Ughelli North, Ughelli South and Udu Federal Constituency in the lower chamber of the National Assembly.

In a statement in response to numerous questions by members of his constituent titled “My Position on the Water Resources Bill, made available to our Correspondents, Waive itemized six sections of the bill that appear injurious to the wellbeing of the people.

Some very disturbing sections, according to him, include Section 129 which says “No person shall: (a) use water otherwise than as permitted under this Act; Section 103 which borders on the Condition for licensing which is subject to the commission,” noting that “the conditions are not expressly stated but left to the hands of the Director-General.”

Quoting further from the statement, Waive whose tone appeared worried, listed “Charges for water use Section 104: the poor people in our communities who live by the river and depend mainly on the river for their source of water may be made to pay to fetch water from the river or to wash their clothes in the river if it would be allowed.

“Wastewater discharge will be paid for in Section 97; License to use water will be subject to cancellation, review, variation, renewal etc, with conditions attached. Section 105.

“The Act will give the commission the power to enter into any property, install establish or set up site for the purpose of carrying out waterworks.”

The House of Representatives member went further to spell out five implications of the provisions on the country and the people, especially in the riverine areas.

One of such implications he identified as
uncertainty, saying “the Act is silent on so many issues leaving it to the commission to make regulations for the proper enforcement.

“Water is life and we don’t know the extent to which the law will be enforced, thereby putting the lives of so many in the hands of a few in power.”

He added that there’ll be “increased hardship; especially for those whose life and livelihood are dependent on the water bodies near them, the level of impoverishment will, no doubt, increase.

“Security risks; with what is going on in the country, it will be risky if the government is to take over all the rivers and the river banks to a certain kilometre, which it can then allocate to whoever it deems fit.

“Some of our riverine communities that don’t have landmass, but practically live on the rivers, will be displaced by this Act and their cultural heritage took over and given to foreigners or non-indigenes of the areas or the highest bidder as the case may be due to the level of corruption in the country.

“Conflict of Interest; the Land Use Act already vests ownership of all lands in the state on the state government, and, if by this Act all rivers and the riverbanks, as well as the underground water belongs to the Federal Government, there will be conflicts at various points, in other words, both laws cannot conveniently co-exist.”

“One will be tempted to ask, what is the intention behind this law? Is it really for the general good of the Nigerian people as it states?

“The various River Basins, which are currently under the control of the government, has not been properly managed instead it has been grossly politicized; how then can the government manage and control all the water bodies in the country?” he queried.

Waive recollected that “In 1969, the Federal Government took over oil right to manage and distribute for the common good of the general public but we have seen how it has been used even to the detriment of all in the country.

“If Water, which is currently the most available and highly needed natural resources for human survival, is put in the hand of the Federal Government to manage, we cannot imagine the impact it will have should it be mismanaged like every other sector of the country has proven to be.”

Meanwhile, Hon Waive has admonished the Federal Government to focus its energy on other untapped and mismanaged mineral resources such as gold with high economic value rather than dissipating its strength on water resources.

“We should at this time if we must begin to look at other solid mineral resources such as Gold and the like that has high economic value and capable of diversifying the Nigerian economy which is currently over-dependent on crude oil.

“Our economy is in a coma and needs urgent resuscitation. It is common knowledge that the solid mineral resources are not properly regulated as the activities of illegal mining is big business in some part of the country,” he enthused.

A fuel tanker has exploded at Anthony inward Gbagada, Lagos State. This happened as a result of the tanker losing control while on motion and fell sideways thereby leading to an explosion and got two unidentified vehicles burnt…National Water Resources Bill

Hundreds of followers of the Speaker of the House of Representatives, Hon. Femi Gbajabiamila have continued to react to the twitter message on his official twitter handle: @femigbaja, on his engagement with his counterparts from Ethiopia, Ghana, Kenya, Senegal and South Africa on the planned collaboration in the joint task of loosening the stranglehold of foreign debt on our economies, ahead of the 2021 conference of African Speakers, scheduled to hold in Abuja…National Water Resources Bill  National Water Resources Bill

[ICYMI] I was not in any reconciliatory meeting with Gani Adams, says Obasanjo