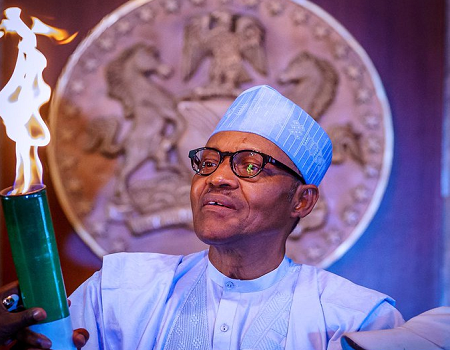 President Muhammadu Buhari on Thursday received the National Sports Festival’s “torch of unity” with a call on the private sector investors to join hands with the government in youth and sports development in the country.

Speaking at the ceremony at the presidential villa, Abuja, which also flags-off the torch’s movement across Nigeria, he reiterated his administration’s commitment to continue supporting and providing the enabling environment for the development of sports at all levels.

The ceremony heralds the National Sports Festival scheduled to hold in Benin City, the Edo State capital, in March this year.

President Buhari said: ‘‘I am pleased to receive the National Sports Festival “Torch of Unity.’’ It is a symbolic representation of the Unity, Peace and Solidarity amongst Nigerians, especially the athletes and officials in the 36 States of the Federation and the Federal Capital Territory.

‘‘Since the inception of the National Sports Festival in 1973, the games have been a useful avenue for interaction, integration for our youth, sportsmen and women and a platform for states to showcase their best in sports.

‘‘It is for this reason that the Federal Government intervened to host the last edition of the Festival in the FCT in order to salvage the sports fiesta from permanent closure.

‘‘I wish to commend the Federal Ministry of Youth and Sports Development and the Federal Capital Territory for hosting the event in 2018.”

The president hailed the ministry for initiating the “Adopt an Athlete or Stadium Campaign,” for sports development in the country, noting that it is one of the useful ways to create opportunities for participation by firms and individuals.

He, therefore, invited sports lovers and enthusiasts to take advantage of the “Adoption Campaign” to be part of raising the banner of sports in Nigeria.

On the 2020 Olympics and Paralympic in Tokyo, Japan, scheduled for July 24 – August 9 and August 25 – September 6, 2020, respectively, the President used the occasion with the sports fraternity to wish the country’s athletes the best of luck at the games, urging them to be good ambassadors.

In his remarks, the Minister of Youth and Sports Development, Mr Sunday Dare, said with the flag off, the Torch of Unity is expected to move around all the States and the Federal Capital Territory before finally arriving Benin City on March 22, 2020, for the opening ceremony of the 20th Edition of the ‘‘Nigeria Olympics.’’

‘‘The Torch of Unity for the National Sports Festival carries with it the objectives of the festival itself, chief amongst which is to symbolise unity, peace, friendship, tolerance and hope among Nigerians.

‘‘When the Torch moves round the cities and people see it, they begin to properly realise the games are here, and it always brings a good feeling to everyone,’’ he said.

The Minister also thanked the President for identifying with the Festival, noting that his performing the symbolic lighting of the Torch of Unity is a testimony of the importance the administration attaches to youth and sports development in the country.