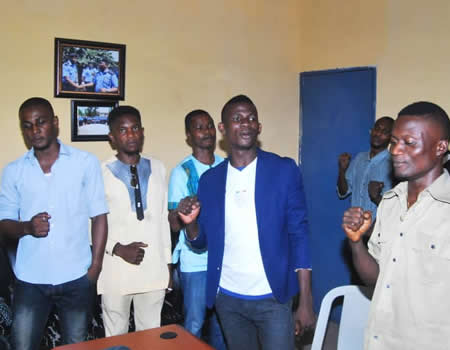 The leadership of National Association of Polytechnic Students (NAPS) through the National President, Olasunkanmi Ijaduoye, and its Senate President Ibrahim Olawale Seriki have appealed to the Federal Government to listen and pay proper attention to the National Union of Electricity Employees (NUEE).

The NAPS leadership disclosed this in a statement at a press conference held in Ilorin.

The polytechnic students call on the Federal Government to look at the effect of the strike on Nigeria’s economy at a time when insecurity has been a disaster.

“It is unethical as a nation with a developing capacity to be in a state of total blackout despite the nemesis engraved in it repercussions.

ALSO READ: We must ensure development of mining sector ― Sanwo-Olu

“The nonchalance of the government to the electricity workers is uncalled for, to humanity.”

According to the Chairman, NUEE, Federal Capital Territory Chapter, Godfrey Aba, said the union were at the ministry to protest the non-payment of severance package to members who were employees of the defunct Power Holding Company of Nigeria.

The union embarked on strike on Wednesday at the end of a 21-day ultimatum issued to the government concerning some working conditions in the sector. He further accused the government of doing nothing throughout the period the ultimatum lasted.

The statement further read, “It is at the point of this release the news of the suspension of the industrial action breaks to the air which is applaudable for both parties even though the reasons are yet to be made public as we speak.

“It is on this note we urge Federal government to consider every Nigerians where about 70% of this Nation are youths in which capacity National Association of Polytechnic Students (NAPS) represents, implore the government to consider the positions of the union in calling off this strike towards consideration of humanity by the Union which is commendable for capacity Nation building.
“We give kudos to the electricity workers’ Union for taking Nigeria first in shifting ground and enjoins the Federal government to not take their negotiation for granted and desist from making industrial actions and protests the only language they understand before sorting issues that matter as National Interest. Nigerians are undoubtedly at the receiving end of protests and industrial action.
“We also want the government to know that no sane citizen in a sane society will take to the streets or abandon daily works in line with strike if there are no leakages like this.
“But we believe at the end of every tunnel there is always light.”