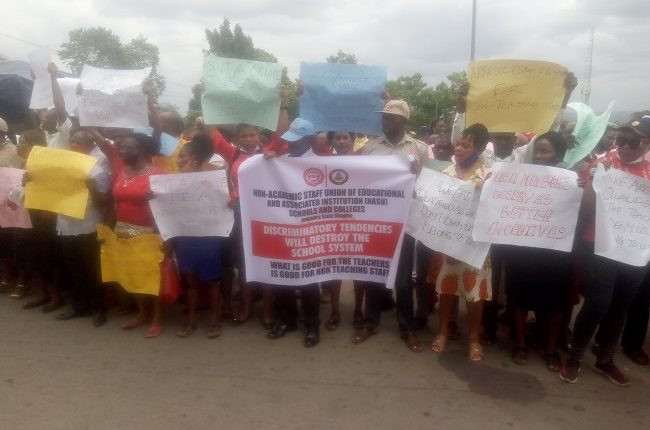 Anambra State branch of Non-Academic Staff Union of Educational and Associated Institutions (NASU) on Monday joined the three days nationwide protest in a bid to pressure the Federal Government to include non-teaching staff in primary and post-primary schools in the Harmonised Retirement Age for Teachers in Nigeria Bill (2021) which would soon be transmitted to the National Assembly for enactment into law.

Nigerian Tribune had earlier reported that the federal government had excluded non-teaching staff in planned legislation to extend the retirement age of teachers to 65 years and the years of service to 40 years from the current 35 years as well as special salary scale and enhanced allowances. 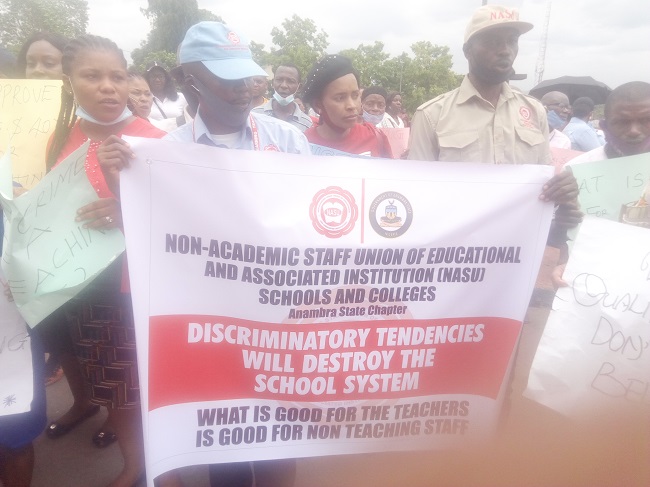 It could also be recalled that President Muhammadu Buhari during the Teachers Day celebration in 2020 announced the new incentives for teachers in public basic and secondary schools in the country.

Addressing the protesters at the Government House, along Enugu-Onitsha Expressway, Awka, the State NASU Chairman, Comrade Nwafor Humphrey, explained that since the announcement by President Buhari, the non-teaching staff have been pushing for their inclusion in the new condition of service.

He said “but it appears the FG has forgotten us. We have been making efforts to see that the president also include non-teaching staff. But now a Bill is about to be passed to the National Assembly for consideration and that is why we considered that we have to come out in Anambra State to join the national body and make our demands known to the state government and State Assembly.

“Already, letters have been sent by the leadership of NASU in the state to the State Assembly, Anambra State Universal Basic Education Board, office of the State Head of Service and the State Post Primary School Service Commission.

“So, we are here to hold this rally to tell the world about the welfare of the non-teaching staff in the country.”

He explained that non-teaching staff deserve to be included in the new condition of service as they are the engine room in schools.

Also speaking at the protest, Comrade Mike Iriaka, appealled to the federal government to include the non-teaching staff in the approved Special Teacher Pension Scheme to guarantee better welfare for them in retirement and also extend their retirement age to 65 years and length of service to 40 years.

According to him, the non-teaching staff in the Basic and Post Primary Schools possess requisite certificates and complement the teaching staff. Therefore, “our interest should be accommodated by Government in the ongoing reform.”

He urged the Federal and State Governments to put an end to what it described as all discriminatory industrial relations practices against the Non-Teaching staff in the primary and post-primary schools system in the country.