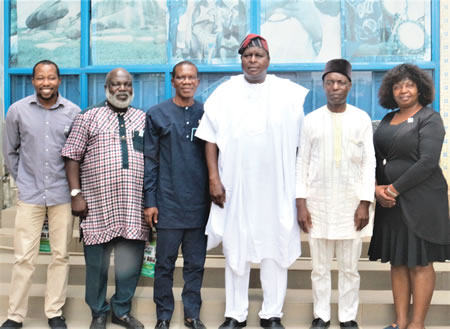 The National Association of Nigerian Theatre Arts Practitioners (NANTAP) has commended Director-General, National Council for Arts and Culture, Chief Segun Runsewe and Inspector General of Poilice, Mohammed Adamu, for tirelessly wrestling government-owned utilities from the grip of unscrupulous individuals, saying they must be appreciated and supported.

NANTAP President, Mr Israel Eboh, who was at the NCAC office on a courtesy visit in Abuja, corroborated the position of many other associations including the National Assembly, all of whom have come out to hail the efforts of Runsewe and the Nigerian Police for ensuring the safety of public outfits like the NCAC cultural village in Abuja.

“We are aware of all the things you have been doing to ensure Nigerians benefit from government assets and for standing firm against all odds in protecting a national monument like the Arts and Crafts village owned by the council.”

“The permanent site has been in the news for sometime now and was occupied by intruders who have been using the property for nefarious activities but we must thank you for your tireless efforts in resisting them and repositioning the culture industry. Since you’re coming on board, the culture industry has not remained the same.” He added.

Mr Eboh charged the NCAC boss not to relent in ensuring the purpose for which the village was created is accomplished.

Narrating his efforts at securing the NCAC Cultural Village, Chief Runsewe observed that he believed he was divinely called to serve in the culture sector insisting that he would remain resolute in his commitment to ensuring the advancement of the sector.

He pledged his support for NANTAP reminding his guests that he was a board member in the 80s and has maintained close ties since then describing them as partners in progress in the development of culture and performing arts in Nigeria.

Runsewe recalled that the association has been in existence for the pass 30 years just as he reassured his visitors that he will continue to involve the body in every national programme organised by NCAC especially NAFEST and INAC, two flagship programmes of the Council.