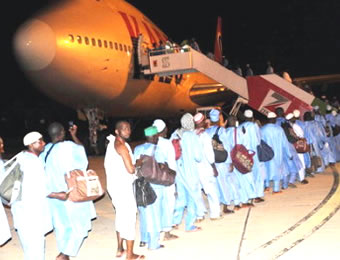 THE KWARA State Muslim Pilgrims Welfare Board, in conjunction with the National Hajj Commission of Nigeria (NAHCON), has launched the Hajj Savings Scheme in the state to accord underprivileged Muslims the opportunity to perform the holy pilgrimage.

At the ceremony in Ilorin, the NAHCON chairman, Alhaji Zikrullah Hassan, expressed the commission’s determination to support poor Muslims to perform hajj the fifth pillar of Islam.

Hassan, represented by the Federal Commissioner (North Central Zone) of the NAHCON, Hajiya Halimah Jibril, explained that the scheme was designed to make hajj pilgrimage easy and affordable for subscribers.

He noted that the scheme, which is being run in collaboration with Jaiz Bank Plc, would avail Muslims the opportunity of saving gradually at their convenience over a period of time to facilitate their performance of hajj.

According to the NAHCON chairman, the benefits of the scheme include profit sharing based on the savings they made, job creation as well as poverty alleviation and empowerment.

Hassan, who commended the Kwara State government and the state’s Muslim Pilgrims Welfare Board for their efforts towards achieving a hitch-free hajj exercise at all times, called on clerics and other relevant stakeholders to support the programme for the benefit of Muslims across the state.

He gave the assurance that NAHCON would continue to align with the aspirations of the Muslim ummah by exploiting cheaper means of performing hajj, advising the public to support the government to flatten the curve of the COVID-19 pandemic.

The Secretary to the Kwara State Government, Professor Mamman Saba Jibril, said the scheme would ensure the participation of more Muslims in the hajj exercise with relative ease.

The surprise visit made on Friday night by the leaders of the ruling All Progressives Congress (APC) to former President Goodluck Jonathan at his residence in Abuja triggered a stir in the major political camps, resulting in at least four possible theories..NAHCON’s Hajj Savings Scheme