NAFEST back to home of culture after 40 years ― Obaseki

•As 23 states, 2Face, Oweifo, others thrill spectators as NAFEST open in style 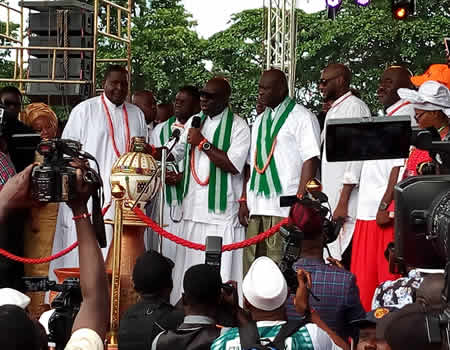 The governor of Edo State, Mr Godwin Obaseki has described the hosting of the 2019 National Festival of Arts and Culture (NAFEST) as a unique event for the state as the festival is coming to Edo for the first time in forty years since it was launched.

Governor Obaseki made the statement while declaring the 2019 edition of Edo NAFEST open at a mini-stadium at the University of Benin with the theme Our Royalty; Our Pride.

The festival which rallied contingent from 23 states which throng the venue in their colourful attire, dance, and cultural performance was also joined by 2Face, Oweifo and other music entertainers who thrilled spectators to different cultural display.

According to Obaseki “We are very happy and proud to host NAFEST which is coming to the home of culture for the first time after the festival was launched 40 years ago.

We are proud to host NAFEST because the festival is a bond of unity for Nigerians and culture is a way of uniting our people and with culture, Nigeria is better united.

Going by the performance of state contingents here today, we are very happy to tell you that in the history of this festival, we have the highest number of states participating and we ask all and sundry to participate in the rest of the event for the next one week.

The governor commended Director-General, National Council for Arts and Culture, Otunba Segun Runsewe for his effort at taking NAFEST to an enviable level for national uniting.

Obaseki, however, declared the Edo NAFEST open with the opening of the festival tradition calabash introduced by the NCAC boss, a few years ago.

Speaking during the opening ceremony, the Director-General, National Council for Arts and Culture, Otunba Segun Runsewe, said he is of the firm conviction that the 2019 edition of the festival will not only be unique but also unprecedented, giving the fact that Benin City has been known to be a foremost cultural hub in Africa with variety of
cultural manifestation dated back to several centuries.

Runsewe who thanked governor Obaseki for making the hosting right for the 2019 edition also heartily commended the Oba of Benin, Omo N’Oba N’Edo Uku Akpolokpolo, Ewuare ll for his support, which he described as encouraging and inspiring.

“I heartily congratulate the Oba of Benin on his coronation anniversary and as part of the activities lined up for the Edo NAFEST 2019, we shall be having a day of royal splendour dedicated to the celebration of the grandeur of royalty.

“Part of the vision of the current management of NCAC is to make culture a key player in the national economy, capable of creating mass employment and empowering the people in line with the economic diversification policy of the President Buhari administration.

“It is in the light of this that we have expanded the scope of NAFEST to include free skill acquisition. the essence is to train unemployed youths, women, the physically challenged and other vulnerable members of the society in various skills in arts and crafts.this is to make them self employed and employers of labour.”

Earlier in his opening remarks the Commissioner of Arts, Culture, Tourism and Diaspora Affairs, Edo State, Osaze Osemwegie-Ero commended the uncommon effort of the Oba of Benin for throwing his weight of the event for making it a reality and also thanked governor Obaseki who have put a lot in awaking the promotion of culture and tradition in
the state.

According to Osemwegie-Ero “I am very happy, it is happening for the first time in the history of Edo State and this was done through the effort of the state governor.”