NAFEST 2019: We need more good people like Runsewe in Nigeria ― Oba of Benin 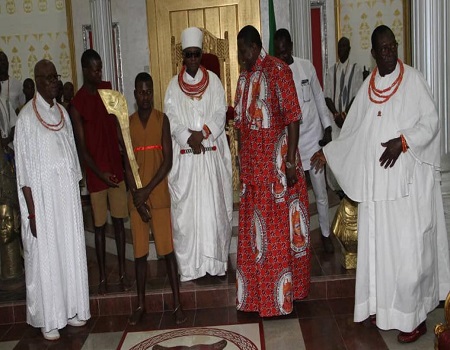 His Royal Majesty, the Oba of Benin, Omo N’Oba N’Edo Uku Akpolokpolo, Ewuare II, has extolled the Director-General of the National Council for Arts and Culture, Otunba Segun Runsewe.

The revered monarch said Nigeria needs great minds like Runsewe who are passionate about the promotion of the country’s rich and diverse cultures expressing his delight at the choice of Benin for the next edition of the National Festival for Arts and Culture slated for October.

Oba Ewuare was speaking when the DG along with his management team and 30 state directors of culture including major culture stakeholders visited him in his palace.

His Royal Majesty was also glad that NAFEST will be hosted in Benin from Oct 19th to 26th with activities evenly distributed in major symbolic venues across the ancient city all in a bid to showcase the culture and boost the state economy.

The Benin Monarch concluded by pledging his unflinching support towards NAFEST 2019 as preparations hit top gear.

Delivering his address during the visit, Otunba Runsewe hailed the Oba whose exploits and impressive antecedents as Nigeria’s ambassador ensured the restoration of peace to Angola amongst other noble achievements during his ambassadorial spell.

The NCAC boss intimated that at least 3 million people from around the world will flood Benin during NAFEST just as the city is designated to host the first-ever royal golf tournament come October with plans underway to establish the first royal museum and many more expected goodies courtesy NAFEST 2019.

In conclusion of activities lined up for the weeklong technical committee meeting which ended Thursday, the NCAC DG and about 30 state Directors of culture including other important stakeholders were hosted to a grand reception by the executive governor of Edo state represented by his deputy, Comrade Philip Shuaibu at government house, Benin.