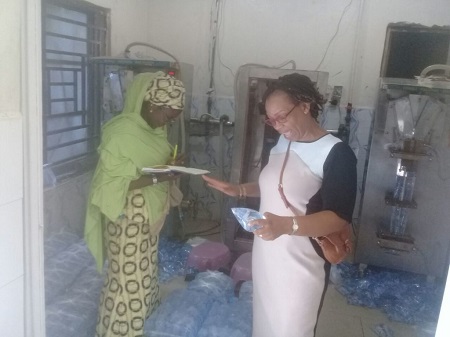 THE National Agency for Food and Drug Administration and Control (NAFDAC) on Thursday stopped the production of 17 sachet water companies in Kaduna over various offences.

Mr Natim Mullah-Dadi, the State Coordinator of the agency, made the disclosure during its routine inspection to such companies as part of efforts at ending the production of substandard packaged water.

According to him, the affected companies committed various offences bordering on illegal production, relocating without the agency’s approval, expired licenses and producing under poor manufacturing practices.

“We did not shut down the companies due to other activities in the compound, but we put them on hold in order to stop production till they comply with the agency’s guidelines,” he said.

Mullah-Dadi said that after the raid, the agency was alarmed at the unhygienic environment some illegal sachet water producers in the state operate.

He disclosed that loosed parts of water packaging machines, packaged water samples and a generator set were confiscated during the exercise to ensure compliance.

He warned illegal sachet water producers to desist from producing unhygienic and unregistered packaged water that could endanger public health.

The coordinator, however, urged residents not to patronise any packaged water without the NAFDAC number and the date of production clearly displayed on it.

He revealed that all packaged water remained fit for consumption only within two months of production.

News Agency of Nigeria (NAN) reports that the raids were carried out within the metropolis in collaboration with the Association of Table Water Producers of Nigeria and the Nigeria Police Force.

Buhari expresses concern over lack of interest in technical-based institutions

APC a massive failure compared to our government ― PDP governors