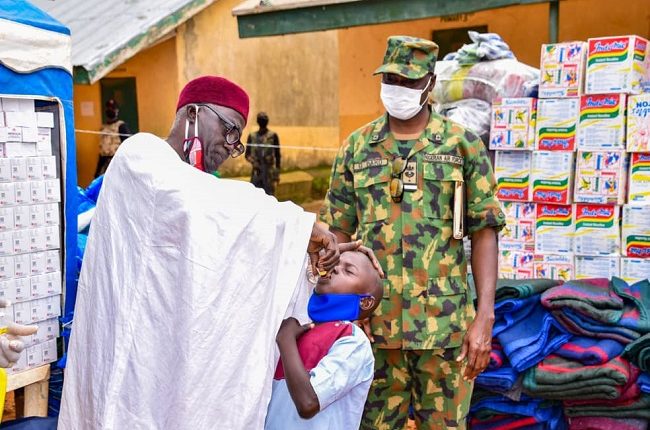 The Nigerian Air Force (NAF), has begun a six-day medical outreach and distribution of relief materials to Internally Displaced Persons (IDPs) in the two local government areas affected by the crisis in Southern Kaduna in Kaduna State.

This was contained in a statement made available to newsmen in Abuja by the NAF Director of Public Relations and Information, Air Commodore, Ibikunle Daramola.

According to him, the Chief of the Air Staff, Air Marshal Sadique Abubakar, in his message, said that NAF would do everything within its power to bring succour to the people.

He added that the intervention was “to calm the restiveness in this environment whilst ensuring security and safety of human lives as well as bringing relief so that the people can continue to engage in their daily businesses.”

According to the  Chief of the Air Staff who was represented by Air Commodore Gideon Bako, Chief of Medical Services “we are going to have six days of medical outreach. However, three days will be for the Mercy IDP Camp in Zonkwa and then another three days will be carried out in Mariri in Kauru Local Government Area of the state.

Abubakar said the reason for the outreach was not far fetched as the entire nation and international community was aware of the humanitarian situation in Southern Kaduna adding that the outreach programme would attend to over 3,400 displaced persons in the two camps.

“This is why we felt that, in the NAF’s usual show of concern about the plights of people, we need to conduct this medical outreach and distribute the much-needed relief materials,” he added.

While  appealing for their cooperation in ensuring that the medical outreach successfully touched their lives, he said: “The NAF is very passionate when it comes to humanitarian activities and has been so concerned about medical outreaches in other parts of the country.”

Earlier, the Chairman of Zangon Kataf Local Government, Dr Alias Manza, who was represented by his Deputy Mr Tonak Yakubu had commended the NAF for the intervention saying that the  Council appreciated the act of kindness and concern shown to the IDPs by the NAF.