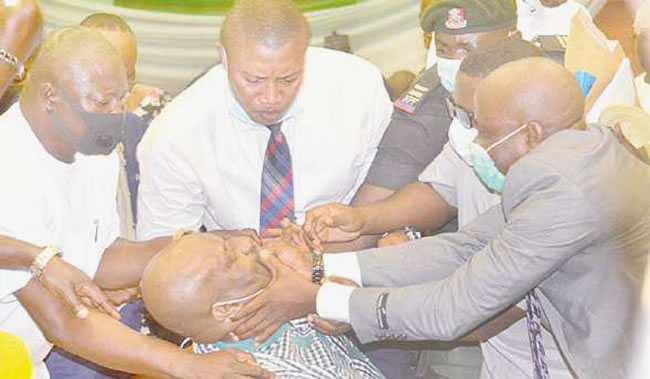 THE ongoing investigative hearing into the allegations bordering on misappropriation of N81.5 billion by the management of Niger Delta  Development Commission (NDDC) was temporarily halted on Monday after the acting  managing director of  the commission, Professor Daniel Pondei fainted and was rushed out of the National Assembly  Complex for medical attention.

The Peoples Democratic Party (PDP), however, said the “dramatic collapse” of the acting managing director while being grilled by the House of Representatives committee underscores the weight of corruption that has bedevilled the All  Progressives Congress (APC) administration.

It took the intervention of some stakeholders to resuscitate Pondei who fainted around 12.49 p.m. while the committee had to adjourn sitting for 30 minutes. Meanwhile, two sponsored protester groups clashed at the entrance of the  National Assembly while the investigative hearing was ongoing.

The group supporting the National Assembly probe, known as the Emerging Leaders Forum of Nigeria clashed with the group backing the NDDC and Akpabio against the probe, which is Niger Delta Development Initiative. Speaking on the development, the PDP said it was obvious that the embattled NDDC acting managing director collapsed under the weight and shame of overwhelming collective guilt brought on him by the exposure of massive corruption being perpetrated by NDDC officials and APC leaders.

In a statement signed by the party’s national publicity secretary, Kola Ologbondiyan, the PDP said: “It is revealing that  Pondei could go no further in the face of scathing revelations of direct pillaging of resources meant for the development  and welfare of the Niger Delta people, in an unbridled corruption racket, in which the Minister of Niger Delta Affairs,  Godswill Akpabio, also stands accused.”

The party asked Nigerians to recall that the embattled NDDC boss had, last week, stalled proceedings by challenging the legislators and walking out on the House of Representatives investigative panel. The statement read: “The the situation in the NDDC is just a tip of the iceberg on the humongous corruption, looting spree and concealments going on in ministries, departments and agencies of government being perpetrated by APC leaders and their cronies.

“Our party restates our submission to President Muhammadu Buhari to immediately suspend the Minister of Niger  Delta Affairs, Akpabio, as well as disband the NDDC interim management committee if he indeed desires the coordinated probe he ordered to yield any credible results.

The party urged President Buhari to note that the people of the Niger Delta region, who are being deprived of their welfare, is following the development with keen interest.

War Against Corruption At Crossroads – Presidency
The Presidency, on Sunday, affirmed that the present administration’s war against corruption is at crossroads, saying that Nigerians must join hands to roll it back on course… Read Full Story
Air Force reveals last 6 hours of Arotile’s life •She suffered head injuries, it says
DETAILS of the last six hours of the late first combat helicopter pilot, Tolulope Arotile have been released by the Nigerian Air Force. The details were contained in a preliminary investigation report released by NAF’s Director of Public  Relations and Information, Ibikunle Daramola, on Sunday… Read Full Story
COVID-19: NCDC Confirms 556 New Cases, Total Now 36,663
The Nigeria Centre for Disease Control (NCDC) has confirmed 556 new cases of COVID-19 in the country, bringing the total number to 36,663… Read Full Story
MONDAY LINES: Mourning Our Air Force Heroine
Someone said after COVID-19, the next most-talked-about incident in Nigeria this year would be the death of the 23-year-old Air Force pilot, Tolulope Arotile. I agreed. In her life (and death), the wise must have learnt how old age and wealth count very little in calculating success. Within 23 short years… Read Full Story
Share