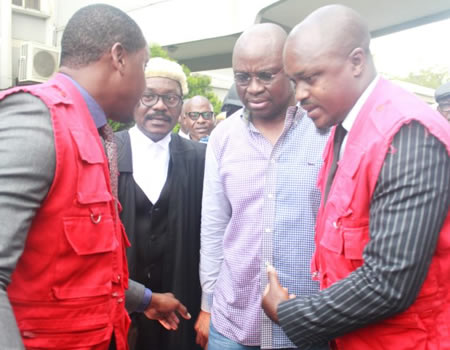 The trial of Ayo Fayose, former Governor of Ekiti State accused of money laundering to the tune of N6.9 billion has been slated for October 21 before a Federal High Court in Lagos.

The former Ekiti State Governor is being prosecuted by the Economic and Financial Crimes Commission (EFCC) for fraud and money laundering charges.

Nigerian Tribune recalls that Fayose was first arraigned on October 22, 2018, before Justice Mojisola Olatotegun, alongside his company, Spotless Investment Ltd, on 11 counts bordering on fraud and money laundering offences.

He had pleaded not guilty to the charges and was granted bail on October 24, 2018, in the sum of N50 million with sureties in like sum.

The defendant was thereafter re-arraigned before Justice Chukwujekwu Aneke, on July 2nd. He had also pleaded not guilty to the charges and was allowed to continue on the earlier bail granted to him.

After his re-arraignment, Justice Aneke had granted leave for the defendant to travel abroad for medicals.

The court had, however, ordered that his International passport be returned to the court, on or before September 16.

But the matter did not come up on Monday as the court is still on vacation.

The charge reads in part: that you Ayodele Fayose and Mr Abiosun Agbele (now facing another charge) on or about 17th June, 2014 in Lagos, within the jurisdiction of this Honourable Court, took possession of the sum of N1, 219, 000, 000.00 (One Billion, Two Hundred and Nineteen Million Naira) to fund your 2014 gubernatorial campaign in Ekiti State, which sum you reasonably ought to have known formed part of the proceeds of an unlawful act, to wit: criminal breach of trust/stealing and you thereby committed an offence contrary to Section 15 (2) (d) of the Money Laundering (Prohibition) Act, 2011 (as amended) and punishable under Section 15 (3) and (4) of the same Act.

Also in part of the charge, Fayose was accused by the anti-graft agency of  receiving a cash payment of the sum of five million dollars, (about N1.8 billion) from the then Minister of State for Defence, Sen. Musiliu Obanikoro, without going through any financial institution and which sum exceeded the amount allowed by law.

He was also alleged to have retained the sum of N300 million in his Zenith Bank account and took control of the aggregate sums of about N622 million which sum he ought to have known formed part of crime proceeds.

The former Governor was also alleged to have used the sum of N200 million, to acquire a property in Abuja, in the name of his elder sister Moji Oladeji, which sum he ought to know also forms crime proceeds.