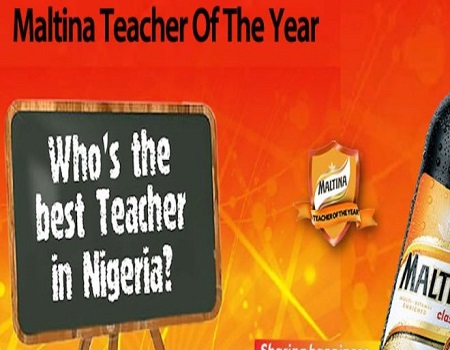 The search for the new best teacher in secondary schools in Nigeria has begun as the submission of entries for the 2020 edition of the Maltina Teacher of the Year award competition opened on Tuesday.

The Managing Director of Nigerian Breweries Plc, the organiser and sponsor of the competition, Mr Jordi Borrut Bel, represented by the communications director of the company, Mrs Shade Morgan, announced the kick-off at a press conference in Lagos, saying the six-year-old initiative has yielded tremendous impact on teachers and teaching profession and also in the education sector generally in the country.

According to him, Nigerian Breweries came up with the Maltina Teacher of the Year award on the platform of its social arm, Felix Ohiwerei Education Trust Fund, to identify, showcase and celebrate exemplary teachers in both the public and private secondary schools nationwide.

Teachers, he said, hardly get the recognition they deserve in spite of the crucial role they play in determining the quality of education and the future of a country, hence the initiative continues even in this period of Coronavirus pandemic when teachers continue to work even from home.

He pointed out that over the years, the company had impacted the education sector across levels and promised to do more.

Borrut Bel explained that a total of N6.5m awaiting the overall winner of the competition just as it applies to previous winners and a plaque and certificate.

He said while the grand winner would go home with N1 million as a national champion and another N500, 000 as a state champion on the day of the award ceremony in October where he or she would be unveiled, the person would also be paid N1 million yearly for the next five years provided he or she remains a teacher.

The person, he added, would also be entitled to all-expenses-paid short training course overseas and his or her school would equally get a block of six classrooms for producing him or her.

He also noted that while the first and second runner-ups would receive N1 million and N750,000 respectively, plus another N500,000 as champion from their respective states, the other state champion would go home with N500,000 each, bringing the total cash prize of the award to N22.25 million.

While declaring that the registration-strictly online- would last until August 14, he said the competition is free and opened to all teachers in government-approved secondary schools nationwide and who must also have been licensed to practice by the Teachers’ Registration Council of Nigeria (TRCN).

In their separate remarks via a digital platform, the registrar of TRCN, Prof Josiah Ajiboye, and the national treasurer of the Nigerian Union of Teachers (NUT), Mr Segun Raheem, said the initiative is really rewarding experience for teachers and the teaching profession.

They both asked other corporate bodies to take the example of Nigeria Breweries Plc to invest hugely in the nation’s education sector so as to take Nigeria and its people out of poverty, while Ajiboye also urged the teachers to vie for African Union and global teachers award competitions.

In his own remarks also via a digital platform, the current champion, who teaches Civic Education and Religion studies at Royal Family Academy, Abuja, Mr Collins Ezem, commended Nigerian Breweries for the initiative, saying the award has added great values not only to the winners but to the teaching profession in the country.

He maintained that teaching is not about earning a living, but about having a strong passion for humanity and emotional stability to impart knowledge regardless of the challenges.

NPA does not operate secret account with us ― Unity Bank