N255m bulletproof BMW was FG’s vehicle, not mine —Oduah 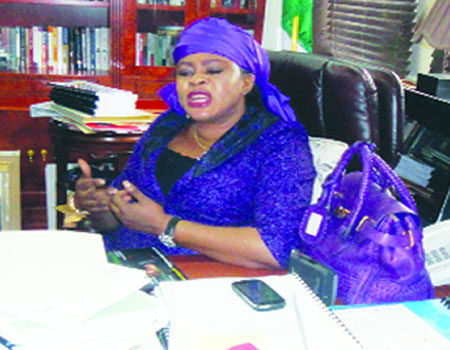 FORMER Minister of Aviation, Senator Stella Oduah, has said she is unaware of any probe by the Economic and Financial Crimes Commission (EFCC) on any matter allegedly concerning her.

She was reacting to media report that she had been invited by the anti-graft agency for questioning over a N225 million bulletproof BMW allegedly purchased by her when she was a minister.

The car was said to have been bought by one of the agencies under the aviation ministry.

Oduah told the News Agency of Nigeria (NAN) in Abuja, on Sunday, that there was no basis upon which she could be probed, saying that the vehicle did not belong to her.

“To start with, I do not know where any letter on the probe is because nobody has invited me, and as far as I know, there is nothing and there cannot be anything on invitation for purchase of a BMW.

“I did not buy a BMW; I have never bought a BMW. The BMW is a property of the government, and it is still in government care.

“The car is with the agency that bought it.

“I have since left the ministry,” she said.

She said that the reports were the handiworks of person who were not comfortable with the  achievements she made in the aviation sector and wanted to tarnish her image.

The former minister said that when she was appointed, the country’s airports were in poor state and could be compared to motor parks.

She said that no effort by anyone, including her predecessors in the ministry, could be compared with what she did to reposition the aviation industry for the period she was the minister.

Oduah, now a lawmaker, challenged anyone to do a comparative analysis of the sector before she became minister, while she was minister and after she left as minister.

“I think some people are not just comfortable that what we did in aviation is unimaginable.

“What we did in aviation was so far-reaching that it had never been done before; it was unprecedented.

“To get into the lounge where people sit was impossible; most motor parks were better than what we had at the airport, whether in Lagos, Abuja or Sokoto.

“We took them on and efficiently, and in a very timely manner, changed every one of them and made Nigeria airspace safe,’’ she said.

She said safety of Nigerian passengers was made a priority while she held sway, adding that landing gears, flight gadgets, and every single thing was functioning to make Nigeria’s airspace recognised by International Civil Aviation Organisation (ICAO).

“I challenge anybody to just do a spreadsheet; how aviation was before, how I made aviation and how aviation is today.”