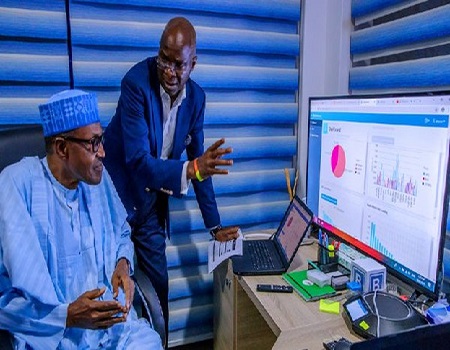 THE Federal Government has in the last 20 years allocated the sum of N2.542 trillion to construction and rehabilitation of federal roads, Tribune Online findings at the Federal Ministry of Finance, Budget and National Planning, as well as the Federal Ministry of Works and Housing, have revealed. The allocation was made during the administrations of four former leaders of the country; General Abdulsalami Abubakar (1999), Chief Olusegun Obasanjo (1999-2007), Alhaji  Umaru Yar’ Adua (2007-2010) and Dr Goodluck Jonathan (2010-2015) and the current president, Muhammadu Buhari from 2016 to date.

The amount represents allocation o the Federal Ministry of Works as well as the agencies under it, notably, the Federal Road Maintenance Agency  (FERMA).  Federal roads amount to 35,000 kilometres out of the 200,000- kilometre (17.5 per cent) of the road network in the country.

In spite of the huge amount of money voted for federal roads construction and maintenance, a good number of federal roads are in a bad state, albeit the Ministry of Works and Housing hardly ever gets the total budgetary allocations to it. While some of the federal roads seem to have been completely abandoned, there seems to be no end in sight for the reconstruction of others as the level of contractors’ commitment leaves much to be desired and slows down the rate of completion.

Construction of the Ilorin-Ibadan express road started in 2001. The Federal Government divided the project into three sections; the first section is from Ojoo in Ibadan to Irepo market in Oyo town. The second section links Oyo with  Ogbomoso, while the third section starts from Ogbomoso and ends at the Gerin-Alimi roundabout in Ilorin.

However, 19 years after the commencement of work on the road, it has yet to be completed. The reconstruction of  Lagos-Ibadan expressway at the cost of N167 billion started in 2013 and was scheduled for completion in 2017.  however,  three years after the initial date set for the completion, the 120-kilometre road has yet to be completed with travellers perpetually subjected to hardship on the road.

According to some Ministry of Works and Housing documents, contract for the dualisation of the Abeokuta-Ibadan road was awarded at the cost of N3.9 billion on November 10, 2010. The project was said to have commenced on December 10, 2010, and slated for completion on March 12, 2012. The completion was, however, extended till March 31, 2016. According to the document, N2,176,202,034.72 has been paid out of the contract sum and 58.1 per cent of the project is said to have been completed. However, when the Tribune Online checked the progress of work on the said project on Sunday, there was no proof of the road being dualised.

Similarly, the Ministry of Works and Housing documents showed that contract for Phase 1 of the dualisation of Ibadan-Ijebu Ode  Road as well as rehabilitation of Ijebu Ode-Mamu/ Border Road was awarded on November 10, 2010, at the cost of N1.6 billion.

The project was initially slated for completion on March 12, 2012, but later extended to June 13, 2014. N341 million has already been paid, while the project is said to be 18.31 per cent complete. However, when our correspondent travelled on the road on Sunday, there was no sign of either the road being dualised or any part of it undergoing rehabilitation.

The dualisation of Abuja-Lokoja road started in 2006. The contract value then was N11.2 billion. It was, however, later reviewed to N29 billion. Although work has advanced on the project, 14 years after, the 42-kilometre road has yet to be completed.

Work started on the Bida-Sacci-Nupeko-Pategi Federal Road in 2001 and it has yet to be completed in 2020 despite the release of N58.5 billion for the completion of the project ordered by the Federal Executive Council in 2019. In the  North-East, the dualisation of Kano-Maiduguri, which commenced in 2006 and was expected to have been completed in  2010, is just about 56.5 per completed despite the over N13 billion expended on it.

The Organised Private Sector has always companied about the poor state of the nation’s federal roads, claiming that this swells up the cost of production but Mr Babatunde Raji Fashola, Minister of Works and Housing has blamed poor funding on this.

To correct this, the Federal Government recently raised Sukuk bond to finance road projects. About three weeks ago,  the Minister of Finance, Zainab Ahmed, presented a cheque for N182.55 billion to the Works Minister to facilitate the repairs of 44 federal roads.