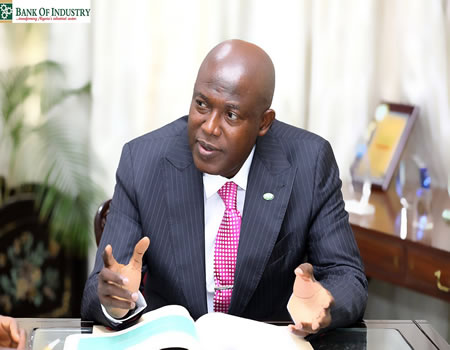 The House of Representatives Committee on Public Accounts on Thursday issued a 24 hour ultimatum to the Managing Director of the Bank of Industry (BoI), Mr Olukayode Pitan, saying that he risked being arrested should he fail to appear Friday by 11 am.

The chairman of the Committee, Hon. Kingsley Chinda (PDP, Rivers) gave the ruling following submission by Mr Taiwo Kolawole, Chief Financial Officer of the bank who told the committee the his MD could not make it to the meeting because he was already scheduled for another meeting with some executives of the Enugu state government, adding that the meeting was too late for the MD to postpone. Asked when they got the 2nd invitation, he said they got it on the 28th of July.

This angered a member of the committee, Hon Gabriel Onyewife said, that the BOI MD’s representative explanation was annoying as it was insulting to the effect that the meeting with the Enugu government officials supersedes that of the National Assembly.

Onyewife therefore moved that the committee summons the MD to force his appearance.

The chairman of the committee, Hon Chinda however noted that “over N8 billion loan given out have not been recovered and the bank is not doing anything about it according to the query. The second query is on another N2bn unexplained expenditure.”

The officer attempted to respond when Hon Onyewife countered saying that he has no authority whatsoever to speak on the issue on ground, not after his scathing insult on the parliament by prioritising a meeting with state government officials above that of the National Assembly.

Ruling on the matter, Chinda said: “Considering the enormity of the sum involved, over N11billion as contained in the query by the AuGF, and considering the fact that the MD has given more importance to a meeting with Enugu state government, we are tempted to take action as appropriate but in the spirit of fair hearing, we want to give him another opportunity so that he can appear before us tomorrow, the 18th of Aug 2017 by 11 am, failure of which we will order for his arrest.”

Meanwhile, the committee also ordered the managing Director of the Bank of Agriculture, Kabir Mohammed Adamu to reappear before it today to respond to queries against the organisation.

Mr Emmanuel Ameh, Executive Director, Regional Banking at the Bank had told the committee that his MD who came to the National Assembly earlier had to leave, following information that officials of the Islamic Development Bank, the African Development as well as the World Bank were coming to see him over loan facilities the bank is seeking.

The committee which expressed disatisfaction with the development therefore asked the bank’s representatives to step aside and remain within the premises pending when the MD got back from the said meeting to respond to the queries.

The Managing Director who is just a few months in office however could not make it back before the committee adjourned sitting for the day.

The Chairman, Kingsley Chinda however told Indepedent later that the BOA was asked to report to the committee today by 10am having listened to the MD who later came to appeal that he’d be given another opportunity.

“I asked them to come back on Friday because we had adjourned and I could have taken them alone in my office”, said.

The 5 queries as issued by the Auditor General of the Federation in its report before the committee covered a period between December, 2014 and 2015 respectively.