The disappearance of a one-year-old boy from a church in Akure, Sotitobire Prayer Centre, has been causing
ripples between the parents of the missing toddler, the church and security agencies in the state. HAKEEM GBADAMOSI writes on the events that led to the recent destruction of the church. 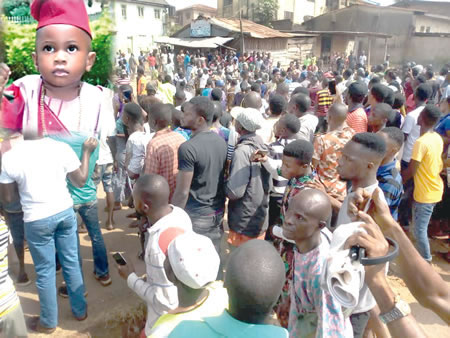 One-year-old Gold Kolawole went missing during a church service at Sotitobire Miracle Centre, in Oshinle area of Akure, the Ondo State capital, on November 10, 2019. The disappearance of the toddler has sparked a huge controversy in the state in the last one month as it remains one of the hotly debated issues and it has been quite tasking for security operatives in the state to unravel the mystery behind the disappearance of the toddler.

Gold Kolawole disappeared from the church after his mother left him at the children’s department of the church where he was duly registered as number 87 on the list by church workers in charge of the department. However, to the surprise of the mother, young Gold was nowhere to be found a few hours into the service, when she came to check on him; his seat was found empty, and he was not among the more than 200 kids in the hall.

She raised the alarm about the child’s disappearance, and despite multiple searches  and assurance from the leadership of the church that the boy would be found,  Gold has not been seen again and is largely presumed to have been kidnapped from the church. The mystery over the disappearance has caused rift between the family and the church, with the family claiming that the matter was not given appropriate attention by the police in the state.

Speaking on her ordeal, the mother of the boy, Mrs. Modupe Kolawole,  who claimed to have suspected foul play over her missing son, alleged that the leadership of the church and the police were being insensitive to her plight. She claimed that despite reporting the disappearance of her only son to the church authorities and the B’ Division Police Station in Oke-Aro, as well as the anti-kidnapping office at Alagbaka, Akure, no single arrest or interrogation had been made.

She said, “They had been advising me in the church that I should take my child to the children section but I refused because I felt that he is too young because he has not started walking. So, I decided to take the child to them at the childrens department, thinking that maybe if he mixed with some of his mates there, it would help or motivate him to walk.

“I dropped him there and I registered his name as number 87, but after an hour, I went back to go and check on him around 11:45 am, but his chair was empty. I raised the alarm but they assured me my son would be returned. I was surprised that this did not affect the church service, and when it was around 3pm,  I started causing a scene and the service abruptly ended.”

She said the prophet old her and her husband to go home that the boy would be brought back alive. She said the prophet had been avoiding her since then, and that they resorted to informing the traditional ruler of Akure, Oba Aladetoyinbo Ogunlade, who intervened.

Nigerian Tribune gathered that the 14 minders who were at the children’s section when the boy got missing, and the parents of the missing boy,  Temitope and Modupe Kolawole took part in an oath-taking event at the Odoro shrine within the palace. The General Overseer of the church, Prophet Samuel Babatunde Alfa, did not take part in the oath-taking event, which heightened suspicion.

Confirming that the oath-taking event had been done, the chief press secretary to the deji of Akureland, Mr. Michael Adeyeye, said the oath-related event took place in the palace and “the children’s teachers alongside the parents of the missing boy took part.”

On why the general overseer was left out of the exercise, Adeyeye said “he was not indicted by the parents of the missing boy in their statement at the palace.”

A twist was, however, introduced into the matter when some aged women, half naked, protested in support of Prophet Alfa, leaving tongues wagging over the development and  many questions unanswered.

The aged women in their bras and wrappers stormed the church auditorium, exonerating their prophet of any wrongdoing and vowed to go to any length to ensure that the man of God was not rubbished and his ministry’s image tarnished.” They attributed the development to the handiwork of some detractors who are hellbent on frustrating the prophet.

“We are behind you. You are unmovable and unshakeable. They have failed. We will triumph. It’s just outright blackmail and mudslinging by agents of darkness,” one of them said.

This might be responsible for the action of a human rights group , under the auspices of the Sunshine for Integrity and Justice, which frowned at the way the police had been handling the matter.

The coordinator of the group,  Odion Mathew,  alleged that the police command was being lackadaisical in its investigation into the matter.

“It would be a thing of shame and ineptitude for the Ondo State police command not to have taken any serious step on the matter. A whole human being is missing, not an object, and the police seem to have kept quiet about it. It is unfortunate.

“For over two weeks now, nobody has been arrested or interrogated among the care givers in the church, under whose care the boy was missing. How could a boy get missing among many children at the juvenile section of the church and the police are keeping quiet?

“This is not good enough for a country like Nigeria. We believe we are not in a jungle. The police must act on this matter. The perceived silence of the police on the matter, and the experience in the past in this country make one to believe that there is an attempt to let the matter suffer a natural death,” Matthew said.

The group called on the Inspector-General of Police, Mohammed Adamu, to order for a full investigation into the matter.

But the state police public relations officer,  Mr. Femi Joseph,  denied that police were foot dragging on the case.

He said: “lt is not when the police arrest people indiscriminately that you know that we are working. The commissioner of police invited all those concerned, including the general overseer of the church, the children’s teachers, ushers and parents of the missing boy. They were drilled personally by the state police commissioner for over three hours. So the allegation that we are not doing anything is far from being true.

“The matter has been handed over to the Criminal Investigation Department for proper investigation by the commissioner for further investigation. Police are no magicians. We are sad about the incident and will unravel those behind the kidnap of the boy during the church service.

“We are digging deep into the mystery surrounding the disappearance of the boy, and l want to assure you that we will come up with the facts and will make it open to the public.”

The DSS swung into action recently with the arrest of Alfa, who was quizzed over the missing boy. A source close to the Prophet informed the Nigerian Tribune that the house of the arrested prophet was searched by the DSS, where over 200 international passports were discovered.

Things also turned awry recently when news filtered into town that the body of the missing boy was allegedly exhumed at the altar of the church by some security agents. This led to pandemonium during the church was torched by an angry mob, leaving about four people, including a police officer, dead and several others injured. About three vehicles were also burnt by the angry mob. The news was eventually found out to be false.

Meanwhile, the prophet of the church, Alfa, was said to have collapsed in the DSS custody and was rushed to the hospital for treatment. It was gathered that his lawyer, Akinyemi Omoware, had filed an application at the Federal High Court seeking the unconditional release of the from the custody of the DSS.

“The respondents have no statutory power to arrest, detain and investigate the applicant for an allegation of a missing child, same not being crime against the internal security of Nigeria.

“The fundamental rights of the applicant were not violated by the respondents to warrant the grant of the reliefs sought, Omoworare said.”

At anniversary coronation, Onpetu calls for restructuring of traditional institution

Lagos-Abeokuta expressway of frustration and anguish