My wife sleeps, snores, while I cook, care for our kids; my mother-in-law dictates the tune in our home —Husband

•I provide the house with foodstuff; he borrows money from my mum and never pays back —Wife 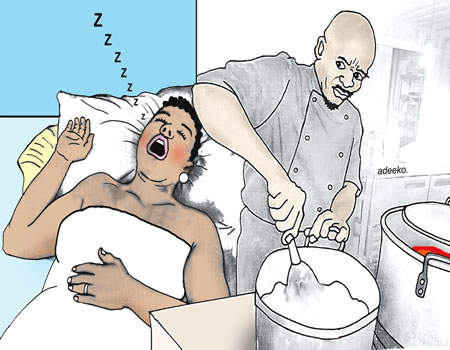 Collins in his suit stated that his wife was rude, disobedient and abandoned her duties. He added that she allowed her mother to control their home.

Collins further sought for the custody of their two children.

Collins stated that:“Hellen was a dutiful and loving wife early in our marriage but she gradually changed because her mother was always ill advising and instigating her against me.

“She abandones her duties at home, neglects our children and cares less about their welfare.

“She goes to bed early and wakes up late. She snores in bed when the children and I are almost ready for school and work.

“I once saw our children in rough school uniforms and woke her up to change them to neater ones. Rather than get out of bed, she turned her side and told me she would do so when she was awake.

“I had to stay back to change their uniforms before rushing to work.

“She doesn’t cook many times at home which spurs my decision to cook or eat from food vendors.

“I decided to show my displeasure at her behaviour by packing some of my belongings and moving out of the house. I was out of home for ten days but she was not bothered about my whereabouts nor display any sign of remorse.

“My lord, I was sick and admitted in the hospital but she failed to take care of me. She did not tell my family members I was sick and when my mother got to know and challenged her, she told her she felt it was not necessary to inform her since I was still alive.

“After several tests were carried out on me, it was discovered I was poisoned, “Collins told the court.

“My father-in-law, when he was alive, warned me not to allow my mother-in-law in my house and narrated to me how he ruined his life.

“My mother-in-law moved in with us immediately her husband died and turned my home upside down. She dictates the tune while she hates seeing my family members come to my house. She also advised my wife wrongly and instigated her against me.

“I reported my wife and her mother to our pastor and he requested to see both of them but they turned down his request.

“I once got home and discovered she had packed my electronics from home. I reported her at the police station and they were retrieved from her.

“She also once left home for ten days and abandoned our children without making her whereabouts known. I had no choice but to carry out her duties in the house.

“My lord, my wife has frustrated me enough, please, separate us, “the plaintiff pleaded.

Giving her evidence, Hellen stated that:”My lord, he was the one who asked my mother to stay with us so that she could help take care of our children and she spent few months with us.

“He was in the habit of borrowing money from my mother while she was with us and would fail to pay back.

“I’m a responsible woman and do take care of my family. I’m the one who buys foodstuff for the home; I cook on a regular basis while he pays our children’s school fees.

“I packed away his electronics because he denied me access to our children which according to him was my punishment for leaving home for days without his knowledge.

“I returned them after he arrested me with the police.”

Ruling after listening to both parties, the court president, Alhaji Suleiman Apampa dissolved their wedlock and awarded custody of their two children to the defendant.

The plaintiff was ordered to pay N10, 000 as their feeding allowance every month. He was also asked to be responsible for their education and health care.

Is a daily bath necessary?