My wife slapped me, rained curses on me —Man

I slapped him twice for holding another woman’s hand —Wife 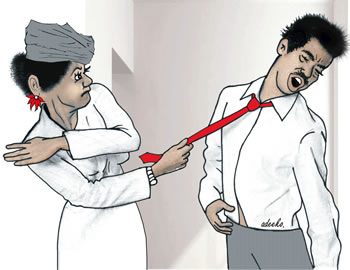 A man, Gbade Olaniyi has approached Ile Tuntun Customary Court, Mapo, Ibadan, Oyo State, seeking that it put an end to the seven-year-old relationship between him and his wife, Bunmi Olaniyi.

Gbade alleged that his wife was wicked, troublesome and in the habit of slapping and raining curses on him.

The plaintiff stated that he had had enough of his wife’s misbehaviour and that he was no longer interested in their relationship.

Bunmi agreed that their union be dissolved stating neglect, infidelity and constant beating by her husband as her reasons.

“My lord, I’m not happy living with my wife. Bunmi rather than being a blessing unto me is a curse. This among others is my reason for seeking divorce,” Gbade said while giving his evidence.

“Bunmi and I quarrel almost every day because she hates to see people with me.

“She makes our home unwelcoming for my family members, friends and church members. She’s always cold towards them.

“Bumni does not carry out her responsibility in the house as it is expected of every woman. Rather than clean the home and cook my food, she would go to her parents’ house without my consent.

“On many occasions, she would stay back for days not caring how I was faring.

“Bunmi abandoned our home for her parents’ for eight months and five days while carrying our second pregnancy. I brought her back home after she put to bed but she ensured she made my life miserable.

“The more I showed my displeasure at her irresponsible act, the worse she became. Rather than take to correction, she would go irate and rain curses on me.

“My lord, Bunmi has no respect for me. She does not fear me. Any time we had a heated argument, my wife would slap me,” the plaintiff said.

Gbade added that “Bunmi moved out of my house and rented an apartment when it became obvious that two captains could not stay in the same ship.

“A lady in our compound came to my aid by helping me to fetch water and cook my food after my wife left. My wife got to know about this and came to fight me. Her parents also accused me of being unfaithful to her.

“I got angry and vowed to marry the young lady. My wife on hearing this brought people home to beg me. I agreed that she moved back to my house after much pleading but I later regretted doing so.

“Bunmi got worse. She took to fighting and raining curses on me day and night.

“She once slapped me for refusing to eat her food and at another time for going to work on a Sunday to source for fund to run the home.

“My lord, I have had enough of my wife’s atrocities. I plead that you end our marriage today,” the plaintiff stated.

Bunmi giving her evidence said, “My lord, I agree that Gbade and I go our different ways because he has never been committed to our marriage.

“He constantly failed in his role towards me and our children as the breadwinner.

“Gbade is tight-fisted. He neglected me during pregnancy. He didn’t give me a dime for my medical attention when I was sick. He told me to take care of myself from the proceeds of my business.

“He never gave me anything without the consent of his family members and this I always told him I detest.

“He refused to check on me when I was pregnant and at my parents’ place neither did he send me money,” the respondent  explained.

Bunmi further said, “My lord, my husband is unfaithful to me. He sleeps with every woman in our compound.

“I once saw him holding hands with one of them and showed my disapproval.

“We fought over this and I slapped him twice.

“I moved to my parents’ house after I took ill during pregnancy and he neglected me.

“He came to the hospital with this same woman to check on me when I was delivered of our baby.

“I was the one who decided I would go back to his house after delivery and not him.

“My lord, I went mad and fought the lady cooking for my husband when I was at my parents’ house when, by accident, I came across love messages and recharge cards my husband sent to her.

“I slapped my husband after he humiliated me by slapping me twice in her presence,” Bunmi stated.

The case was finally struck out after the plaintiff declared his intention not to pursue the case any further as a result of their church leadership intervention.

‘My wife chased me out of the house with cutlass, attempted to stab me with broken bottle’

It’s not by force to get married; true love’s hard to find —Omashola

‘I discovered my wife is mentally ill after she stripped naked, destroyed my property…