•I drink beer, but I don’t get drunk, says wife 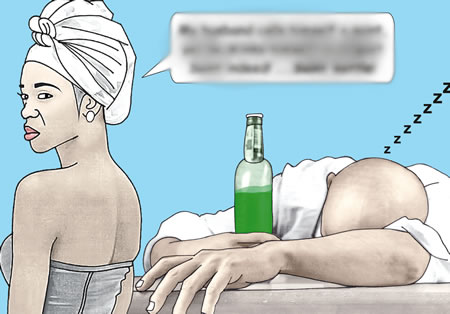 LOVE for beer has cost a 24-year-old woman of Garden Township in Lusaka, Zambia, her marriage of three years.

Her husband, Moses Mwakapiya, 36, says he has given up on his wife, Agness Mambwe, because she has defied his order to stop drinking beer.

According to the Daily Mail of Zambia, he was testifying in a matter in which Mambwe sued him for marriage reconciliation. The couple got married in 2017 and has one child.

Mwakapiya told the court that he no longer loves Mambwe because she has defied his instructions on several occasions.

“We have sat down on several occasions to counsel Mambwe to stop drinking beer but she has not changed. I am tired of her behaviour and I don’t think I can continue staying with her,” he said.

Mwakapiya told the court that he always finds the children alone when he comes back from work. He said Mambwe has neglected her duties because of her love for beer.

However, the court president, Miyanda Banda, said he needed more evidences and adjourned till Monday, April 20.

“I decided that we go on separation hoping that she would change but to no avail. She comes home at a.m. to come and throw stones at my door. She has not changed,” Mwakapiya said.

He told the court that last time he found Mambwe at a drinking place after she told him that she was going to visit her friend.

Mambwe, however, told the court that she still loves her husband and wants them to reconcile their differences.

“Yes, I drink beer but I don’t get drunk. Last time my husband hit me with a brick in the head, I woke up at Chipata clinic,” she said.

Mambwe said her husband neglected her and found another woman when the couple went on separation.

My husband gets drunk, defecates in my pots, woman tells court