•He did not give me, our kids feeding allowance —Woman 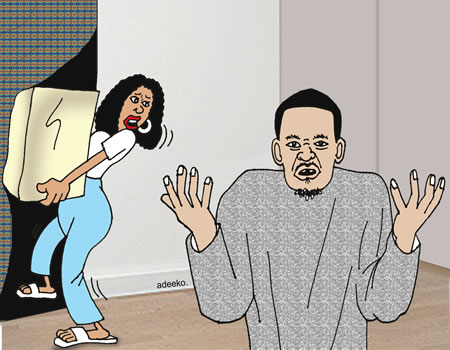 A 39-year-old retired Airforce officer, Richard Imana, has prayed an Iyana-Ipaja Customary Court in Lagos, Lagos State to dissolve his 10-year-old marriage over alleged abandonment and denial of access to his child by his wife.

According to the News Agency of  Nigeria (NAN), Richard told the court that his wife, Nkem, left her matrimonial home and moved in with another man in the same barracks she was living with her husband.

He alleged that Nkem moved in with the man when he was serving in Borno.

“My wife packed out of my apartment and moved in with another man while I was in Borno State.

“Sometime ago, I was very sick and our doctor needed my wife to sign some papers before he could start treatment but my wife refused.

“She denied me access to our children and took the last born to her mother without my consent,” the petitioner said.

The father of three, however, told the court that he still loved his wife.

“I still love my wife but my wife does not love me,” he said.

Responding, 34-year-old Nkem said she moved in with her friend who is a female, married and staying opposite their apartment.

According to her, she moved in with her friend because her husband stopped sending her and their children feeding allowance.

“I did not move in with another man. I only moved in with my friend who is a female and married. Her husband was also serving in Borno at that time.

“I took my children to the village because their father stopped sending their feeding allowance.

“I packed my belongings out of annoyance because, at that time, my salary was N25,000 and it was not enough to cater for myself and the children,” she explained.

Nkem told the court that the marital problem was caused by lack of communication by the petitioner.

She appealed to the court to save her marriage, saying that she still loved Richard.

“We do not communicate as husband and wife. That is why I am always angry with him.

“I still love him but he does not love me, “she told the court.

The court president, Prince Adewale Adegoke, reprimanded Nkem for packing out of her matrimonial home to live with her friend.

He ordered that the last child of the couple should be brought back to Lagos and reunited with his father.

Adegoke urged both parties to maintain peace, and adjourned the case.

She kept late nights, hit me on the head with her shoe and I fainted —Husband