My wife is wayward, got infected with HIV, man tells court

•He treats me like a leper, stops me from cooking his food —Wife 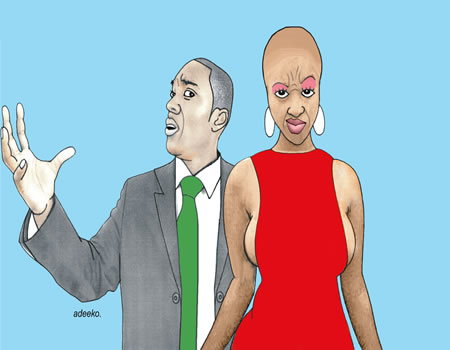 Kazeem in his divorce suit alleged that Iyabo was a liar and that she was wayward. He added she was diagnosed with HIV.

The plaintiff also sought for custody of the two children produced by their wedlock.

Iyabo did not admit to claim, stating that she still loved her husband.

“She’s presently on the death row and will soon terminate my life if I don’t end our marriage.

“My lord, I don’t trust my wife anymore because she is a habitual liar.  Iyabo calls black, white.

“My wife leaves home without my consent and returns whenever she likes. She’s in the habit of coming home late.

“She’s not bothered about our children’s welfare. She abandons them at home and goes out to satisfy her lust.

“The more I complain about her indecent lifestyle, the worse she becomes, “he stated.

He went on: “My lord, nemesis finally caught up with my wife when she suddenly took ill.

“She was ill and refused to seek medical attention. I enlightened her on the implication of this but she remained adamant. Iyabo finally agreed to go to the hospital when it appeared she might die.

“Several tests were carried out on her to know the nature of her sickness. Among these was HIV test.   .

“My lord, Iyabo refused to go back to the hospital for the result of this test despite experiencing much pain.

“I insisted she must go for the result and offered to go with her.

“We when the result came out it read that Iyabo was HIV positive.

“I almost fainted when I heard this but I kept it to myself.

“Shocked and afraid she might have infected me, I kept the information a secret between us,” the plaintiff added.

“My lord, I decided we relocate to Lagos and there I made her undergo another test which result read the same.

“My lord, staying married to Iyabo is dangerous to my health. She will infect me with HIV and send me to my early grave.

“I also don’t want our children to be made orphans at their early stage in life. If this happens they will suffer.

“My lord, I plead with the honourable court to separate us and put our children in my custody, “Kazeem said.

Iyabo giving her evidence,  told the court: “My lord, I still love my husband. I, therefore, appeal to the court not to separate us.

“All that my husband said about me are lies. I’m not wayward. I don’t leave home. I’m a tailor and have my machine kept at home. I work at home.

“Kazeem is stern and doesn’t have the milk of nature flowing in him.

“I took ill in October and was made to go through series of tests.

“Immediately the results came out and I was diagnosed as being HIV positive he started treating me like a leper.

“He stopped me from cooking for the family and also restricted me from going near or our children.  Kazeem likewise kept his distance from me.

“My lord, I almost ended up being depressed and would have had psychological breakdown if my family members had not come to my aid.

“I have gone for another HIV test and I am still waiting for the result,” she stated.

Giving his judgment, the court president, Chief Ademola Odunade  adjourned the case and ordered the defendant to go for another test in a government hospital. The procedure ,according to him must be carried out through court.