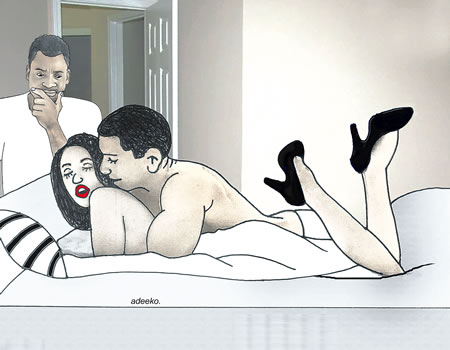 A man, Olalekan Ojo, has told Oja Oba/Mapo Court C Customary Court, he’s no longer interested staying married to his wife, Anudetan, whom he got married to seven years ago.

Olalekan in his divorce suit accused Anudetan of irresponsibility and neglect.

He added that she was promiscuous and abandoned him and their only child for four years.

The plaintiff told the court he no longer loved his wife and thus implored it to stop their relationship.

Olalekan also appealed to the court to grant him custody of their child who is a female and aged five years and six months old.

Anudetan acceded to divorce stating that her marriage to her husband had brought her no fulfillment.

She told the court her mind was made up on ending their relationship and moving on with life.

The defendant agreed that the plaintiff have custody of their child but pleaded with the court to grant her access to her anytime she wished to.

The court president, Chief Ademola Odunade, giving his judgment after he had heard both parties stated that it was obvious that the love between both had waned.

Odunade thus ruled that their marriage be dissolved.

He granted custody of their child to the plaintiff and ruled that he should make her available to the defendant anytime she felt like seeing her.

Odunade restrained the defendant from seeing their daughter at the plaintiff’s residence.

According to him, the plaintiff must bring her to the court anytime the defendant desired to see her.

“My plea before this honourable court is that it dissolved my marriage to my wife today,” Olalekan stated.

“Anudetan is promiscuous and will soon kill me if I continue with her in this union.

“My wife while still breastfeeding our only child who was about six months old was involved in an illicit affair with a man living three houses to ours.

“The landlady of the house informed me that my wife was dating one of her tenants and that she had become a regular face in their compound.

“She told me she had warned my wife to desist from this shameful practice but that she turned a deaf ear to her.

“The woman finding it difficult to convince me decided to take my mobile phone number and promised to call me whenever my wife visited their compound again.

“My phone rang the follow day and on picking it was the woman calling. She requested that I rush home because my wife was around and in her lover’s room.

“I called my brother and one other relative of mine and we drove on my motorcycle to the place.

“The woman pointed us to his door and we knocked on it requesting to see the occupants of the room.

“The man opened the door slightly but we pushed our way in. To our disappointment we found no one with him.

“Embarrassed, I went to inform the landlady that my wife was not there, but she insisted we search the whole room and even under the bed.

“I went back to the man’s room, knelt down beside the bed and peeped underneath and there she was. Anudetan hid under the bed naked.

“Angry, I dragged her out but stopped myself from beating her. I went home, packed her belongings and dumped them in her lover’s room and warned her never to return to my house,” Olalekan stated.

The plaintiff added that: “I handed over our daughter to my mother who had been taking care of her since then.

“We fed her mainly with powdered milk and cereals and paid regular visits to the hospital in order to be sure she was medically fit.

“I decided against taking a new wife in order to give our daughter the needed attention.

“My wife hardly checked on our child throughout this period.  She was obviously not interested in her welfare.

“Anudetan later relocated to Lagos where I learnt she took up prostitution as a means of livelihood.

“She was there for about four years until she suddenly showed up in my family house where my mother and daughter reside.

“She ran from Lagos because of the high rate at which people were being infected with coronavirus in the state.

“Anudetan moved into my late father’s room and started living with my mother without my knowledge.

“I was furious when I learnt about this and instructed her to leave. She was quite unrepentant. She told me she came back because a prophet told her she should take custody of our daughter which I objected to.

“I reported her to her parents who spoke to her and she left. But to my surprise she came back again demanding that I give her feeding allowance.

“She fought me and tore my clothes. I was annoyed and almost slapped her but I restrained myself from doing so.

“Anudetan forcefully took our daughter from my mother and left her at her sister’s place. She returned her a few days ago when she was handed a court summon.

“My lord, all I pray this court is to separate us and put our daughter in my care.

“I also entreat the court to restrain her from coming to my house or work place to harass, embarrass or fight me, “the plaintiff stated.

The defendant giving her evidence said,  ”The main reason I honoured  the court summon is to make my separation from my husband legal. I don’t find any fulfillment in our seven-year-old marriage and I’m ready to leave.

“He can have our daughter but I want the court to rule that he grant me access to her anytime I want to.”

Anudetan explained that, “Life with my husband was rough because he never cared about my welfare.

“My husband was in the habit of giving me N200 for food while still breastfeeding our baby and this was not even regular. I told him the amount was too small to feed me as a nursing mother but he refused to add to it.

“He was used to coming home late and when I complain he would curse and fight me.

“My lord, the woman who informed him that I was involved in an extramarital affair is his first wife. She lied against me so that my husband could get rid of me.

“The man she claimed was my lover was my friend’s fiancé. Olalekan and I needed some amount which we couldn’t raise. I, therefore, sought my friend’s help who took me to her fiancé.

“We were there discussing with his fiancé on the terms of payment after he had agreed to borrow us the money, but she later excused herself for some few minutes.

“My husband and his brother came in few seconds after my friend stepped out and turned the whole compound upside down.

“They accused my friend’s fiancé of sleeping with me. Olalekan failed to listen to his explanation but went on to slap him.

“My husband sent me out of his house that evening and refused that I take our baby who was then one year and six months old with me.

“My lord, he always frustrated every attempt I made at seeing our daughter.

“He apologised for his misbehaviour after he came back to his senses and I forgave him. He pleaded that I returned home but I already had my plan laid to travel to Lagos to make a living.

“Though based in Lagos, I still paid him and our daughter regular visits and always come with goodies.

“It is true I returned home because of coronavirus pandemic and moved in with my mother in-law, but he lied that I sought the help of a prophet,” she concluded.