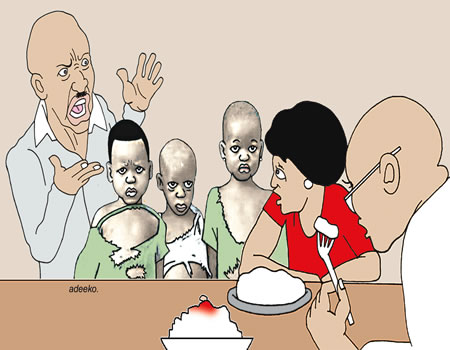 •He aborted my education, went after other women after impregnating me —Wife

The divorce suit brought before Ile Tuntun Customary Court, Mapo, Ibadan, Oyo State by a man, Bidemi Kolapo against his wife, Rebecca Kolapo has been adjourned till April 17.

According to the court president, Chief Olasunkanmi Agbaje, it was necessary to adjourn the case in order that the defendant could produce a proof that their marriage was legally contracted at the registry.

Bidemi who dragged his wife to court alleged that she was involved in an extramarital affair and using his money to feed her lover.

He thus prayed the court to abort their relationship and grant him custody of their three children because she has failed to take care of them.

Bidemi told the court:”My lord, my wife is adulterous and will soon kill me if I don’t put an end to our union and send her packing.

“I labour to meet my family’s needs but my wife being an ungrateful human being, has consistently frustrated me.

“I sought for employment in Lagos and moved there after being offered a job.

“I give my wife a reasonable amount as feeding allowance through money transfer on a monthly basis while I expect to see my children looking healthy and well kept. But to my disappointmnt, any time I come home they look lean and haggard and always appear hungry.

“I always wondered what the matter was until I was informed by neighbours that my wife was having an affair with a co-tenant. I was further told that rather than look after the welfare of our children and use the money I send her to prepare our children good meals, she lavishes the money on her lover.

“She prepares her lover sumptuous meals three times daily and used the remaining to meet his other needs.

“I reported her to her parents and her mother in particular and she counseled her but she refused to change.

“We fought when I couldn’t condone her misbehaviour any more and I reported her to the police. Our differences were later ironed out.

“I later established her in egg business but few months after, she abandoned it and went to work at a construction site as a labourer.

“My mother built a house and we moved there. My wife made the place inhabitable for all us because she was always fighting us.

She later went to report me to her father who took to her side. He came to my mum’s place and ordered my wife to pack her belongings out of the house and go with him, “he concluded.

Giving her evidence, Rebecca started by telling the court she did not admit to claim.

“My lord, I don’t agree to divorce,  ”the defendant stated.

“He can’t throw me out of his house now after aborting my education.

“He impregnated me while I was in SS2 and I moved in with him after he promised my father he would allow me complete my secondary school education.

“Shortly after I moved in with him, he abandoned me and started having affairs with other women.

“I once returned home late from work and I explained to him the reason for this and apologised. But rather than see reason with me, he locked me out of the house.

“I went to report him to my father the following morning and he came home with me. My husband, instead of showing a sign of remorse, insulted him.

“My father raised the issue of the completion of my education with my husband, but I was already pregnant with our second child. He thus insisted my husband and I must legalise our marriage at the registry and we did, “Rebecca told the court.

“My lord, I refused that he went to Lagos to work but his mother and sister supported him.

“It’s true he helped me in starting egg business. He gave me N15, 000 for the business but stopped giving me and our children feeding allowance after this.

“He accused me of dating our neighbour and later got me arrested by the police.

“He asked that we moved in with her mother in her new house and I reluctantly agreed with him. His sister also moved in with us and hell was let loose. We fought every now and then and were regarded as nuisance in the neighbourhood.

“I later joined him in Lagos and rented a shop where I was selling my goods before the Lagos government shut it down along with many others, ”she said.

Put your house in order, write a will