My wife eloped with her herbalist-lover for 8 yrs —Man 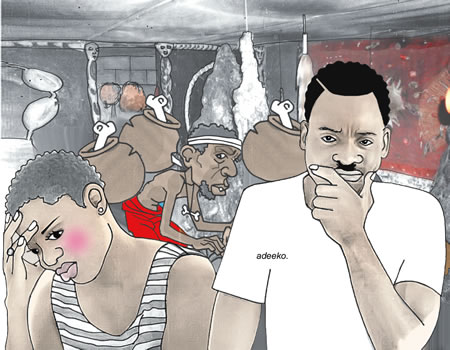 Ile Tuntun Customary Court, Mapo, Ibadan, Oyo State has adjourned till November 2, judgment on the divorce suit brought before it by a man, Musibau Azeez, against his wife, Morufat Azeez.

Musibau alleged that his wife had constantly brought him ill-luck, poverty and sickness since he reconciled with her after she eloped with her lover, who is an herbalist.

The plaintiff prayed for divorce and custody of their two children.

Morufat did not admit to divorce, stating that she returned to Musibau because she did not want their children to suffer.

“My lord, Morufat’s return to my home has brought me nothing but sorrow and a setback.

“She got involved in an extra -marital affair with a herbalist and later eloped with him. Morufat deserted me and our children and returned eight years after.

“I usually met the man in her shop and I assumed he was her customer. I never knew they were dating.

“I once came across the label of this man’s drugs in her bag. I demanded to know what they were doing there and she fought me.

“I was later informed that Morufat and this herbalist were dating.

“I confronted her with this but she denied it.

“My lord, I went to work one day and while on my job, I received a call from a neighbour that she was packing her belongings.

“I pleaded with the neighbour to restrain her from taking our children with her and she succeeded in doing this.

“Monrufat went with all her belongings and mine and didn’t leave any clue as to her whereabouts. I later learnt she eloped with her herbalist-lover.

“My lord, she surfaced eight years after she deserted me looking haggard and famished. She begged that I should take her back and I did after much persuasion from those close to us.

“My lord, I regret ever taking Morufat back. I realised after she moved back to my place that she has been cursed by the herbalist.

“Life has never been the same since her return. I now battle with poverty and diverse sicknesses on daily basis.

“My lord, I don’t want Morufat to destroy my life. I want her to go, please separate us and put our children whom she has abandoned for almost 10 years in my care,” he pleaded.

The defendant, giving her evidence said: “My lord, I left Musibau because he was maltreating me. He never cared for me nor showed me attention.

“I was the one feeding him and our children and even his family members living with us before I left.

“I have likewise resumed this duty since my return because he cares less about our survival.

“My lord, I don’t agree to divorce mainly because of our children. Musibau can’t take care of them. If you separate us they will suffer,” she concluded.

The court president, Chief Olasunkanmi Agbaje, after he had heard both parties stated that more evidence would be needed.

Ruling, Agbaje ordered both parties to return on adjourned date with their children and parents.

‘My husband whipped me, chased me out ‘cos of his girlfriend’

She broke my car windscreen, locked me out of the house for refusing to sell my house…

I cheated on my husband only three times, please, spare my marriage,woman pleads

My husband relocated abroad without telling me, woman tells court