My wife drew knife at me, arrested my mother with police, man tells court —Husband

•My mother in-law is always interfering in our marriage —Wife 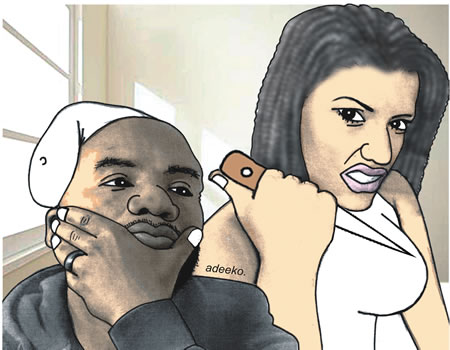 Folorunsho stated that his wife was troublesome, violent and fond of cursing him. He added that she arrested his mother with the police.

Aminat initially refused that their marriage be dissolved, but acceded after Folorunsho insisted he was not going back on his decision.

The defendant admitted to arresting her mother in-law with the police.

The court president, Chief Ademola Odunade, stated that it was necessary that their relationship be ended since it involved violence.

Odunade awarded custody of their two children to the defendant and ordered the plaintiff to give the latter N10, 000 every month as their children’s feeding allowance.

Folorunsho was also mandated to see to their children’s education and be responsible for their medical services any time the need arose.

The plaintiff in addition to these was asked to give the defendant N3, 000 to pack her belongings from his house.

“My lord, Aminat has vowed that she will not rest until she snuffs life out of me, “Folorunsho stated.

“She is adamant and will never take to correction. Any time she misbehaves and I try to call her to order she will get angry and fight me.

“My wife will curse me from morning till night and call me unprintable names.

“Aminat’s presence in my home ……..woes instead of comfort.

“I once took ill and was in bed for weeks. My wife gave me no care and denied me the needed attention. Aminat swore that I would die in the sickness.

“We had a misunderstanding a few weeks after I was back on my feet and Aminat went wild. She seized my shoes and insisted I wasn’t going out.

“She later went for a knife and would have stabbed me but for our neighbours who restrained her.

“She invited her brother who on getting to the scene, pounced on me and beat me blue black.

“My lord, Aminat at another time got my mother arrested with the police.

“I fled home and have been sleeping with my friends for about two months now because I was not sure of her next step of action.

“I beseech this honourable court to end my marriage to my wife. I’m fed up with her atrocities and no longer love her.

“I also entreat the court to hand me over our children so that I can raise them properly. Aminat is certainly not a good example to them, “the plaintiff pleaded.

“My lord, my husband is a liar. He has another wife and that is where he is presently staying.

“I don’t wish that our marriage be dissolved, but since he is bent on ending it, I pray the court to grant him his wish.

“We had a misunderstanding and my parents did all they could to resolve the crisis between us but Folorunsho’s father frustrated their efforts.

“My husband is in the habit of telling her mother all that transpired between us. She never ceases to interfere in our affairs and would always take sides with her son any time my husband and I quarrel.

“I had complications while carrying our first pregnancy and almost lost my life during delivery.

“My mother in-law showed no concern. She never checked on me while I was on admission.

“My lord, the police arrested my mother in-law after my husband beat me to a pulp and fled the home. Folorunsho came out of his hiding when he learnt that his mother had been arrested,” Aminat stated.

My music is meant to lift women, encourage men —Ikstarr

I sweat too much